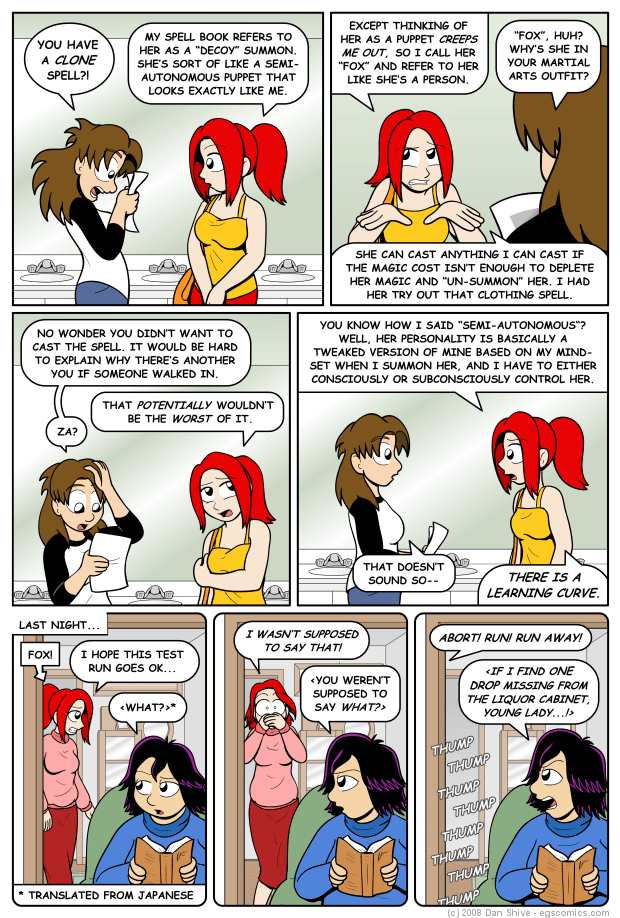 Posted June 27, 2008 at 1:00 am
Nanase's pose in panel two is intended to go with the first thing she says in that panel. I'm not entirely convinced the pose works, but I'm emphasized things I've said by making similar motions with my hands, so I wanted to give it a shot.

I haven't written some of the earlier commentaries as of the time of writing this commentary, but I know this will one day be a repeat statement: I like that Nanase and her mother are often literally speaking to each other using different languages. Okay, so it's actually Fox talking in this comic, but she's expressing Nanase's thoughts (modified slightly to be in first person), so it still applies.

The clone summon, AKA Fox, originally had a much broader definition of what defined her behavior. It was to the point that I realized that I wasn't sure how I was going to write for her, and narrowed the range a bit by having Nanase's mindset at the time of summoning affect Fox's personality. This allows Fox to adopt any given facet of Nanase's personality while still allowing for everything else I wanted her to do, such as act on thoughts and feelings that Nanase herself would resist acting upon.

As with the clothing swap spell, I am being intentionally vague about the specific rules of this spell and how exactly it operates. I learned long ago not to set such things in stone too early on, thereby giving myself some wiggle room if I decide certain mechanics of the spell were bad ideas. If I don't spell it all out now, the only one who need know the difference should I change things later is me.

Assuming I don't mention it in the commentary. Which I'm likely to do.

One may find it odd that Ellen was so intent on pointing out perverted uses for the clothing spell, but has said nothing suggestive about the potential of two Nanases. There are a few reasons for this, but the big one is that Ellen's first thoughts when seeing a clone spell would naturally not be about how cool it is or ways to use it for fun. No, they would more naturally be along the lines of "oh my God", "this is disturbingly close to home", "is this clone like me?", etc.

Fact of the matter is, if Nanase had not made it almost immediately clear that Fox is of a very different nature from Ellen, this comic would have quickly spiraled into an angst-filled dramatic moment.

So, yeah, thank goodness Nanase cleared that up as fast as she did!