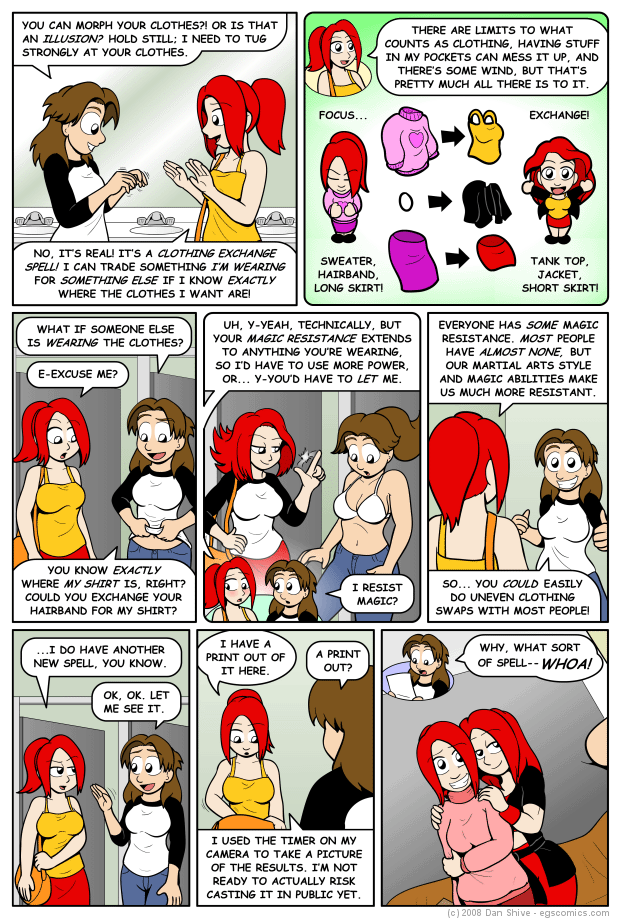 Posted June 25, 2008 at 1:00 am
I'm hoping at least one person reads panel four as actually happening prior to realizing that the visual is all in Nanase's head.

The title for this comic was originally Ellen's last line. It's a line I believe is funny, but didn't fit Ellen's character given what she was seeing. I was having a crisis of character VS humor when I remembered I hadn't thought up a title for the comic yet.

Some people are likely to read this comic and assume the egg came before the chicken... or the chicken before the egg. Whatever. Point is, there'll be an assumption regarding order that will be incorrect.

When it comes to Nanase's clothing exchange spell, all the points Ellen came up with were things I realized after coming up with the initial spell. I wanted Nanase to have a spell that would allow her to magically change her clothes. I decided early on, however, that I didn't want her clothes to change shape. I figured that would make the spell less ideal if one was messing with clothes that have sentimental value.

I know, it's a strang reason. But that's why I wanted to think up an alternative to morphing the clothes.

Anyway, I decided a clothing swap spell would be the best solution. I then had to decide on conditions for the spell, and figured she should need to know where the clothes she wants are. It didn't take long for Ellen's question from panel three to pop up in mind once that was decided upon.