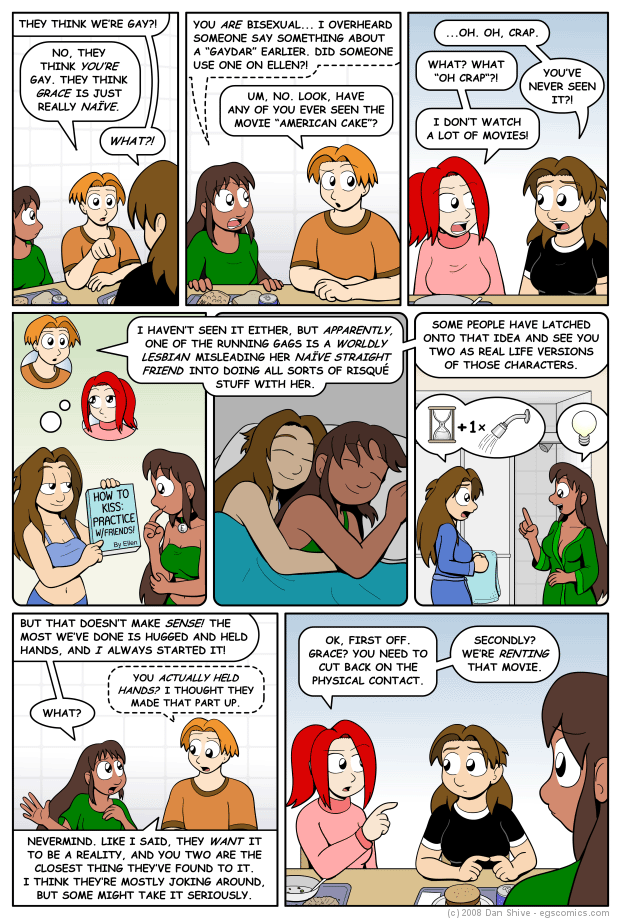 Posted April 30, 2008 at 1:00 am
Ok, this commentary is so long, I'm actually going to divide it up into sections with subtitles. Seriously; it's over two pages at font size 10 when pasted into a word document, and that's not counting this intro.

They Want to Believe

As a fan of the TV show [[wp:Mythbusters]], I am well aware of the phenomenon of people wanting something to be true to the point of skewing perception and logic in order to believe it. On the show, they often address myths that exist simply due to people wanting them to be true in spite of those myths having no basis in reality. They even have to go back and address myths they’ve already proven false simply due to the fans who aren’t willing to give up on the myths they’ve grown to love.

Of course, the fans sometimes have good points when requesting myth revisits, but I’m specifically talking about the more outlandish myths here.

Another point? Space aliens. People will see something odd, and instead of looking for a down-to-earth explanation, many will jump to the alien conclusion without solid evidence. They will ignore every piece of evidence other than the evidence that supports what they want to believe. I’m not saying for certain that there aren’t space aliens out there, but just because we can’t explain something doesn’t mean that aliens are behind it. By that logic, we could blame anything unknown on extraterrestrials.

Another example comes from a special I saw on El Chupacabra (and yes, it was on [[wp:Discovery Channel]]). A scientist sent his best evidence, some fur he had collected from a supposed Chupacabra attack, to be analyzed. He specifically said that if the results revealed the fur to be from a known animal, he would consider it conclusive evidence that there is no such thing as El Chupacabra. The results of the fur analysis? Dog fur. The scientist, in spite of his earlier assertion, did not stop his search for El Chupacabra. Much like Mulder, the man wants to believe.

Wait, did I just compare lesbians to space aliens and El Chupacabra? I guess I did. That’s gotta be worth a GLAAD award, or at least some sort of letter from them. I’m sure the response can only be good.

From a story perspective, I believe it creates a much more complicated situation for Ellen to be accused of being gay without technically including Grace. Yes, Grace is involved, but only Ellen is being given the actual label of being a lesbian, and given that Ellen agreed to be "in the closet" with Nanase, it is a bit of a problem. It also means the people who buy into the rumor don’t technically see her as being "with" Grace, opening up the very real possibility of her being with someone else, such as, perhaps, the person she sits next to every day at lunch?

For the record, I don’t approve of actually doing something like this (tricking a naïve person into risqué and/or sexual behavior) in real life. I find this highly amusing in a fantasy setting, but I would find this taking advantage of a naïve person to be horribly disturbing and wrong in real life. Remember: this is fantasy. This is all well and good here, but lets keep it on paper, ok? Or digital, because this isn’t on paper... though it will probably be in print eventually... whatever! The point is, don’t do this sort of thing in real life.

The Ellen and Grace doppelgangers within Nanase’s imagination are slightly changed physically from the real Ellen and Grace. The obvious differences are that Ellen has longer hair and both are dressed in more revealing outfits. What might be less clear is that Nanase has given the fantasy version of Grace Ellen‘s figure.

Within Nanase’s imagination in panel four, the book title is "How to Kiss: Practice W/Friends", with Ellen herself as the credited author. For those who are perhaps a little confused by this, "W/Friends" should read as "With Friends". Doppelganger Grace is also wearing a sort of collar, a design relatively common outside of EGS continuity, with an E for "Ellen" on it. Given the supposed naïveté of this Grace doppelganger, she likely does not understand the implication.

Panel five was originally more explicit, as there was no indication that these Ellen and Grace doppelgangers were wearing anything at all. They wound up with clothes due to nudity under those circumstances suggesting more than I wanted, which is simply the two of them sleeping together (literally). In addition, the sixth panel is supposed to be the most explicit and shocking one, and having them naked in bed the panel before steps on the toes of that and is just less funny and more explicit in general.

Speaking of panel sixth, in case the comic title is not enough, allow me to break it down further. The translation of what Ellen’s doppelganger is saying would roughly equate to "we’re low on time, and we both need to shower, but there’s only one shower and two of us!". Doppelganger Grace, of course, has figured out a clever solution to this problem, which is likely the same conclusion doppelganger Ellen was hoping for.

As much as I enjoy having characters speak with simple symbols, it does create the occasional need for explanation. I hope that, for the most part, people are able to comprehend it enough prior to my explaining to at least find it amusing.

The logical conclusion to reach from the title "American Cake" is that I am parodying the [[wp:American Pie (film)|American Pie]] movies. In a way, I am, but only the title. There is a real movie that inspired this fake one that has nothing to do with American Pie, though it did include characters as wholesome as apple pie. Can you guess what rowdy movie actually had a running gag of a similar nature within it?

If you guessed [[wp:The Brady Bunch Movie]], you are correct.

For those who don’t know, The Brady Bunch Movie essentially had the characters from The Brady Bunch sitcom living in the nineties, but unchanged from the 70s sitcom. Theses wholesome, unrealistic characters placed in a far more realistic and harsh environment than their sitcom roots effectively made them the most naïve people anywhere, ever.

Within the plot, one of the Brady girls, Marcia, had a friend who was clearly a lesbian who wanted some Brady action, but of course Marcia was completely unaware. At one point, there was even a sleep over that had them sharing the same bed while Marcia remained clueless (which inspired panel five). While I am not a huge fan of the movie as a whole, this aspect of it had an impact on me, and was also part of the inspiration for Amanda’s roommate, Lisa.

So then why, if there exists an actual movie that is already seemingly perfect for getting people to think about this sort of thing, did I make up a fictional movie? Well, first of all, the idea is that this movie is widely popular with teenagers, successful, and somewhat recent. The Brady Bunch Movie was released in early 1995, and were it used as a reference, it would become more and more obscure and confusing a reference as the years go by, and it would be odd for the student body to latch onto it.

Secondly, I don’t own and can’t control The Brady Bunch Movie. It should be ok for me to simply make reference to it, but it would severely limits how I could use it. By making it a fictional movie that parodies both The Brady Bunch Movie and American Pie, and really any other pop culture movie that fits the basic formula, it opens the door to do more with it. For example, what if I come up with a joke or story point that calls for a sequel? The amount of freedom is far greater than if I had referenced an actual film.

The reason the title of the movie is a parody of American Pie is the popularity of those movies (or at least what they once had) and them being teen-related comedies. It just seemed like a natural fit, even more natural than the movie that actually inspired the scenario.