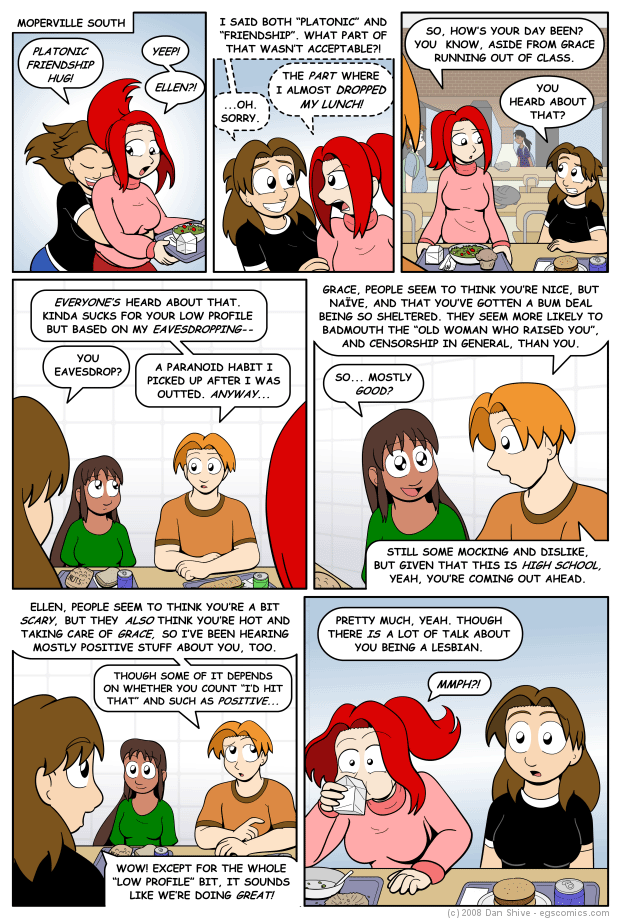 Knowing that I wanted Justin to have all of this information, I determined that he would have overhead the various other students within the school talking about Ellen and Grace. Given the amount of information he has, I also felt that simply overhearing people by accident would not cut it, and therefore had him intentionally listening in on people to gather the information.

I feel eavesdropping as a paranoid habit resulting from being outted (revealed as a homosexual) is realistic, as could many, many other triggers. The main ingredient, after all, is concern over what others might be saying about one’s self. This is NOT meant to suggest that being attracted to the same sex somehow means that same person is going to be an eavesdropper.

Knowing in advance that Justin would be admitting to eavesdropping, I had Elliot claim to not be eavesdropping three comics earlier while talking with Tedd. I like little parallels like that and include them when able. It also could make one wonder whether Justin is simply being more honest about his actions than Elliot.

Nanase was originally going to do a spit take in the last panel, but I considered it too gross and didn’t want to deal with the aftermath of spat out milk getting all over the table, their lunches, and most likely Justin. So instead, Nanase just nearly chokes while drinking. I suppose it says something that I’d rather have that happen than have an unsanitary mess to deal with even within a comic, but I’d rather not put too much thought into that.

There are several hidden aspects to the food in this comic, and other things where if you’re seeing something there, you’re trying too hard. There’s that hidden joke I mentioned, plus other fun facts. First the fun facts:

[list] [*]Ellen and Grace have the same color soda. In my mind, Grace has the same color soda because she didn‘t really know what drink to get, and just got whatever Ellen got.
[*]Grace has a bag of nuts (Nuts? Squirrel Girl? Get it? LAUGH!). She also has what is most likely a peanut butter and jelly sandwich, something I often had for lunch in high school. I really should have had something more substantial, as I was often way too hungry, and that makes me really irritable. As such, I‘m happy she has the bag of nuts.
[*]Ellen has a plain hamburger, just the meat and the bun. If I eat a hamburger, that‘s likely how I‘m going to do it.[/list]

And finally, the hidden gag: with the exception of the milk she is obviously drinking, Nanase has apparently finished her entire lunch by the last panel.