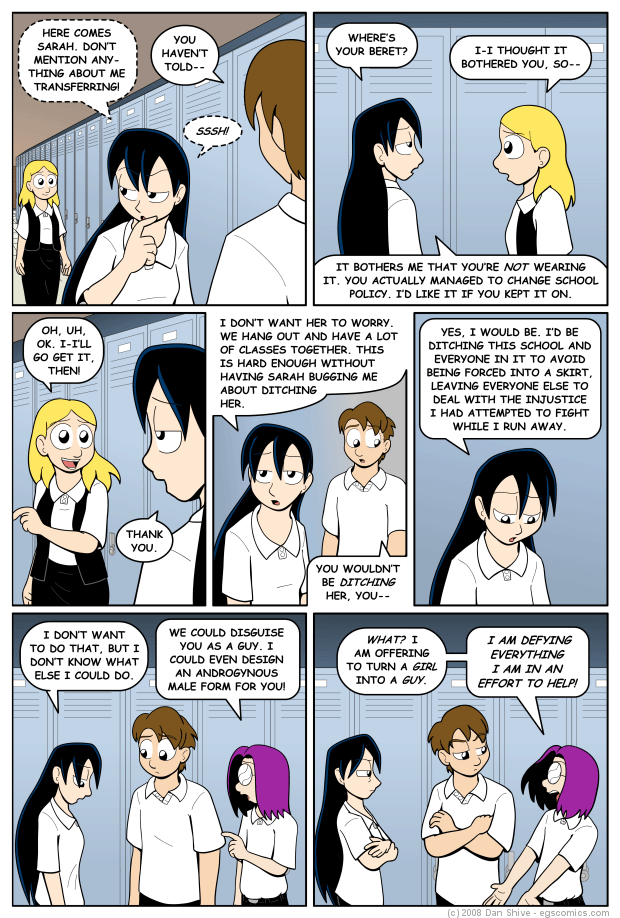 Posted April 25, 2008 at 1:00 am
Is it apparent yet that I like the idea of people simply giving Tedd dirty looks and his defending whatever horrible thing he just said while the others remain silent? Well, I DO.

Which brings up another interesting point. In the previous comic, Tedd made a joke about snatching women’s skirts. This was definitely a hammer-worthy statement, and yet Susan did not flip out and hit Tedd with a giant mystical hammer. I actually hadn’t even considered having Susan whip out the hammer. I think it’s partially because Susan has evolved in such a way that she’s much less likely to flip out in a violent way, and because I only really find the hammer funny anymore when it’s merely a threat and not actually used.

Anyway, in case you haven’t noticed, a lot is at stake for Susan regarding the uniforms. She’s so dead-set against being forced into them that she’s willing to transfer to another school to avoid it, and it could damage, if not effectively end, her friendship with Sarah. Susan usually has a sort of melancholy to her, but the reasons for it have rarely been this close to the surface.