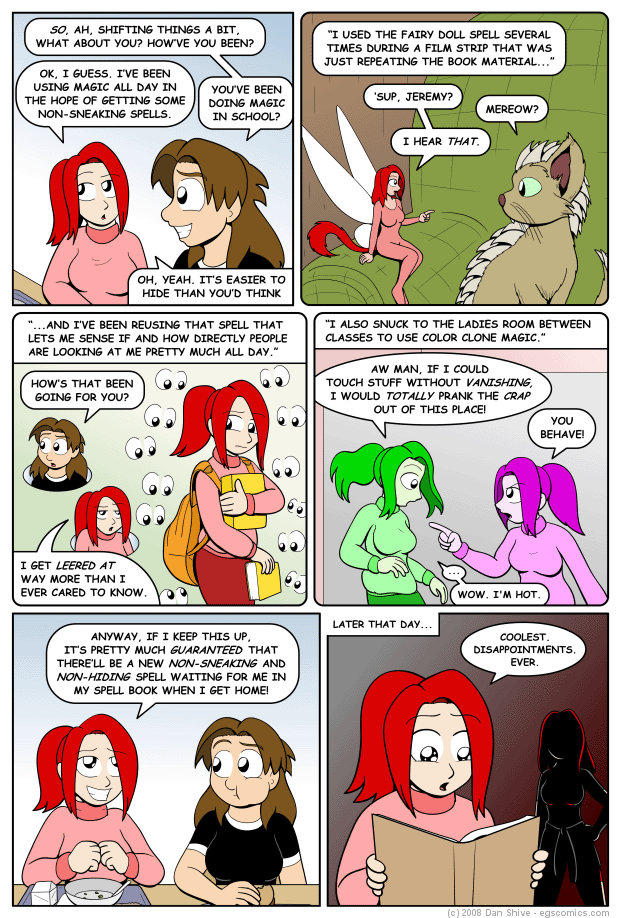 First off, she effectively sneaks out of class with the fairy doll spell while giving the illusion that she hasn't gone anywhere. Which, technically, is true, but it's still deception, hiding, and sneaking around. (PS - Yay Jeremy!)

Secondly, that "who is looking at me" spell is all about keeping tabs on who is watching you. Use of the spell itself isn't necessarily sneaking around, but if using it makes her feel exposed to the point of almost feeling naked, well there's your feeling the need to hide right there.

Thirdly, the color clone magic isn't necessarily sneaking around or deception unless someone uses it for such things, but she's hiding in the bathroom while using it!

All of these spells could be used in ways that wouldn't count as hiding or sneaking, but that's pretty much what Nanase has spent the entire day doing. In her mad dash to obtain new spells that won't make her feel like a hiding sneak, she has done nothing but hide and sneak while using her magic.

All the same, however, it appears her messing up so badly has had results she can't help but find cool. You'll get the chance to decide whether you agree a bit later on.

Half the comics in the past two weeks have had fantasies or flashbacks in them. While one of my goals is to have more such sequences where appropriate, I think this is a much higher concentration than will be the norm.

I tend to enjoy writing and drawing fantasies and flashbacks. The fantasies I like because it allows me the freedom to take the story places it can't normally go without jumping a great many sharks, and I like both because they allow for quick jokes with very little set up.

That said, I prefer fantasies and flashbacks that are somehow relevant to the story being told. I like [[wp:Family Guy]], but there are many, many times when it has fantasies and/or flashbacks that don't have any relation to anything and can be more of a rude interruption of the actual plot than a humorous excursion.

This would probably infuriate Seth Macfarlane, creator of Family Guy, but I think [[wp:Scrubs]] does it best. It goes off the wall with its flashbacks, but their relevancy compliments the plot instead of distracting from it.