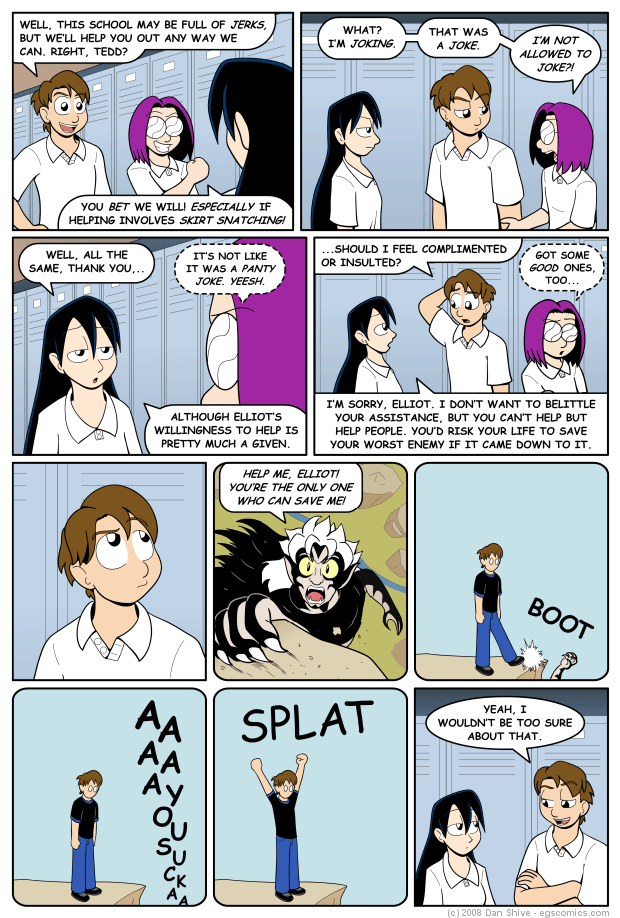 Posted April 23, 2008 at 1:00 am
I personally don’t know what panty jokes Tedd could be referring to, but I’m certain they’re horrible.

Elliot does have a bit of a hero complex of some sort, or however would be appropriate to phrase it. It’s how he met both Tedd and Justin, after all. But would he really help out an enemy in need? Will this be put to at least some sort of test before this arc is over?!

Well, maybe. It’s also entirely possible I just wanted an excuse to draw Elliot kicking Damien off of a cliff.

I wanted to emulate the old Wile E. Coyote and Roadrunner cartoons for panel six, but references for the overhead view of the canyons are more difficult to find than I expected. In my mind, every one of those cartoons had multiple overhead shots of that poor coyote falling off of cliffs, but it’s apparently not as common an occurrence as I remembered it to be.

Incidentally, and this is a little sad, but there was a brief period as a child when I refused to watch the Roadrunner cartoons and got mad when others laughed at Wile E. Coyote. Why? Because the poor guy is just trying to EAT! He’s not bad, he’s hungry! Sure, the roadrunner is justified in running away for the sake of his own self preservation, but are WE so justified at laughing at a starving coyote’s pain?! ARE WE?!

*erhem* Excuse me. And that, ladies and gentlemen, was a brief glimpse into the short-lived hippy phase I went through, ironically preaching the morals of rooting for the carnivore.

Back on the topic of EGS, this isn’t the first "alternate ending" I’ve drawn for Painted Black. Somewhere in my massive collection of old drawings is an image of chibi Damien being inexplicably hit by a meteor. Painted Black was dragging on a bit in my mind at the time, and it was very therapeutic to draw. I had intended to use it as a filler, but never got around to it. If I ever find that drawing again, I’ll need to scan it.