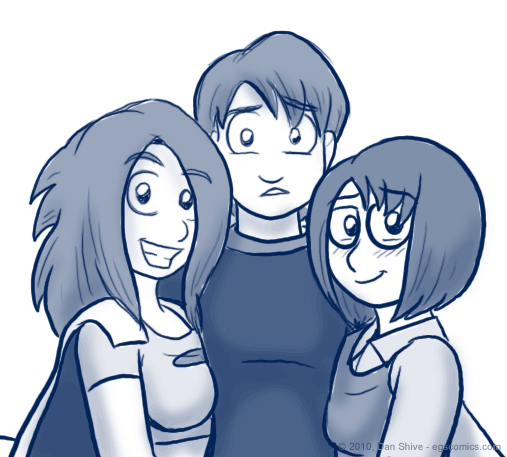 Posted October 21, 2010 at 1:00 am
I drew this simply with the idea of three versions of Elliot uncomfortably close with only Elliot's natural form being uncomfortable, but it is fun to think up possible explanations for it. Clone form shenanigans? Repeated Dewitchery Diamond mishaps? Dream sequence? YOU DECIDE!

Come to think of it, I should draw something like this with Grace, too... although that could quickly get out of hand. Then again, I didn't draw every possible Elliot form here, either, so I guess it would only have to be as crazy as I felt like making it. I could even just draw one Grace! ...Which would defeat the purpose of it, but whatever.

I GUESS it's worth noting that I technically made a height mistake here, but I also guess Super F-Elliot (SF Elliot?) could be bending her knees a little or something. I made her about the right height if she wasn't wearing her boots, but those things add a couple inches. That's why SF Elliot looks taller than Ellen in this comic. They're technically the same height, but those boots have some serious lift to them.