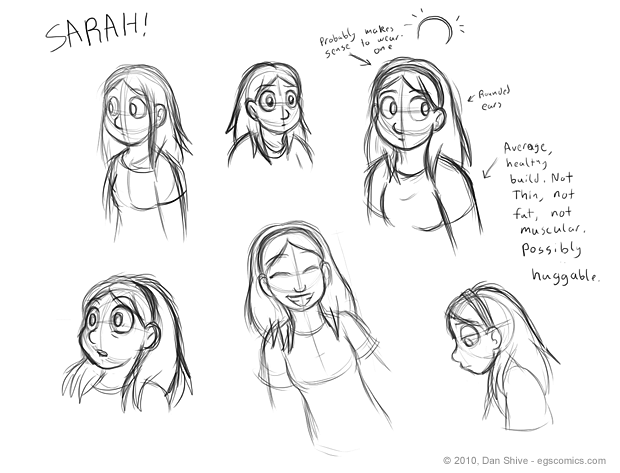 Posted April 20, 2010 at 1:00 am
I think it would take an act of God to talk me out of giving Sarah that hairband. Not only does it help me make sense of her hairstyle, but it reminds me of Alice In Wonderland, which is an interesting connection given Sarah's role as the "normal" one (which I no longer believe is valid even with her lack of powers, but I'll have more opportunities to rant about that later).

I've been trying to find ways to vary Sarah, Grace and Ellen's faces given how similar they are in structure, but it's difficult to do so without making them no longer look like the characters they're supposed to be. That might work as a retooling of side characters, but with these three it's simply unacceptable to change any of them too radically.

I try to give Ellen a slightly more masculine jawline, Sarah different ears, Grace a different style nose, etc, but I suspect hair color, style, eyebrows and skin tones are ultimately how people have, and will continue to, differentiate these three visually.