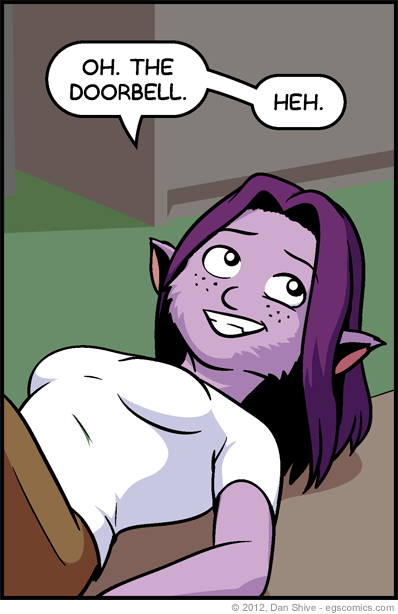 This was the original last panel for the December 14th, 2012 comic, and is an example of what can happen when one draws panels out of order and only has the composition for a comic in their head.

Here's what happened: I originally imagined Tedd's reaction to the door bell being much more energetic to the point of somehow winding up on his back. I had imagined a comical transitional pose in the second-to-last panel to make sense of it, but it was too dramatic a transition.

To keep the question of "how the hell did he/she wind up in that pose" from being at the front of everyone's minds, what I really needed was another panel. That extra panel might have simply been a "thwump" sound effect, but my point is that I needed an initial reaction followed by an impact for this panel to not be needlessly confusing.

In the end, I redrew the panel. I had already gotten as far as inking the original, however, so I decided to finish it and make it all colorful and junk.