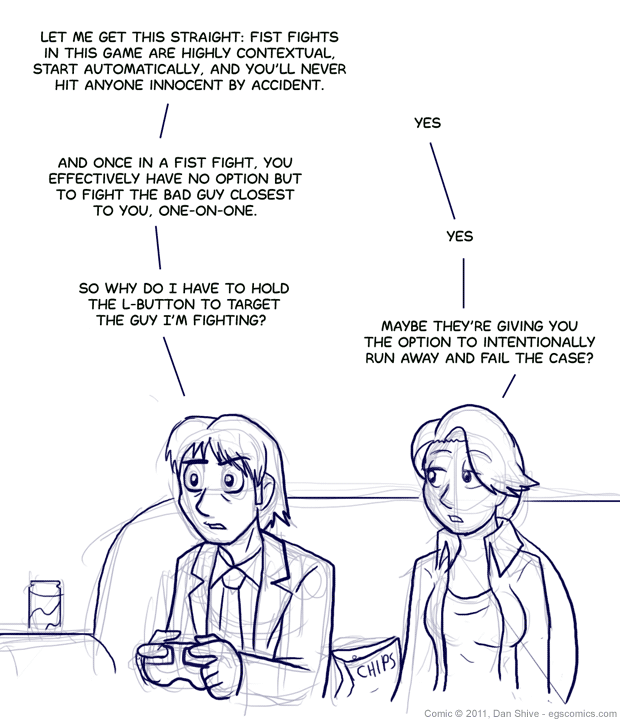 Before I rant about a [s]childrens[/s] ADULT video game, I should note that I might take a break from sketchbook Saturday's for a while. Five story comics a week have kept me pretty busy, and most of what I've been posting on Saturday have been last minute sketches, which wasn't my intention. I'll decide what I want to do with them and post news about it later.

ANYWAY, the game being referenced in this comic is LA Noire, a game which, I would like to emphasize, is an M-rated game and definitely not for kids. I'm not even sure if there's any justification for rating a game "M for Mature" that isn't on the back of the box, and rightly so. I don't buy into the idea of a game like this warping young minds, but I can certainly see it troubling and disturbing young minds. Please note that I'm basing this on it successfully troubling and disturbing my adult mind.

That's not to say it's bad. It just deals with mature themes in an interactive way, and given the realistic portrayal and gruesome nature of what's on screen, it can be genuinely unsettling to look at, let alone interact with.

But I've gotten away from what inspired this sketchbook. LA Noire is, at its core, an adventure game with action scenes sprinkled on top. Unless you've played other games where the action played similarly, this potentially means having to relearn how to fight every so often. Such was the case with me when I literally forgot how to punch. I checked the instruction booklet, and I found the right button, but I still couldn't punch.

I'm not the only one this has happened to, however. I know, because I found the solution to my problem in a forum thread, which was similar to another forum thread I had found, where someone was trying to figure out why they couldn't punch. We were all thinking that all we had to do was press one button to punch, one button to block, etc. We thought we had encountered some glitch that kept punching from working properly.

Alas, such was not the case. We had foolishly forgotten that it was necessary to hold done the left trigger to fist fight. This makes me wonder why the instruction booklet only says that the left trigger is used to target as opposed to "hold this or your character will stand around like a lemon and take all manner of punishment".

It also makes me wonder why it's necessary. You play as a detective in this game, and do not go around punching random people. If you're punching someone, it's because they started it and you are defending yourself. There are literally no other options other than defend yourself, get knocked out, or hope your partner beats them for you, so why is it necessary to hold down a button to do what should be default behavior?

If the fighting was more complex, or if you could run around starting fights, I'd understand this mechanic. As it is, however, it just feels counter-intuitive. Once someone starts a fight, your character's fists are up, so it feels like they're ready to fight. In spite of this, you can't even block unless you're holding down a button to target the only guy you could possibly want to block or hit at that moment.

It's ultimately not that big a nitpick, and it's possible I'm just missing a good reason why it works that way, but it just seems like sloppy design to me in what is otherwise a very high-end experience. I'm still forming an opinion on the overall game, and this certainly isn't a deal breaker, but it's the sort of thing that makes me ask "WHY" in capital letters.

Actually, if you know why, let me know. Maybe that knowledge will fuel next week's sketchbook and I'll be able to draw it in advance for once. You could also fling a question my way, as I'm accepting questions in advance for the next Q&A.