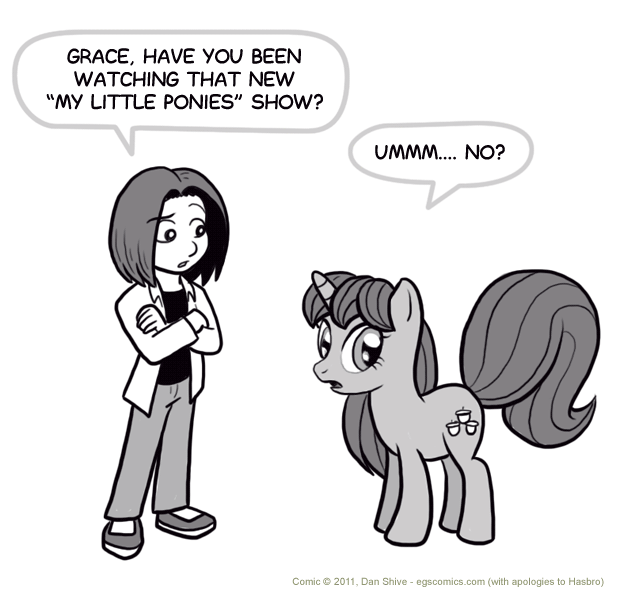 Posted February 22, 2011 at 1:00 am
I'm aware Tedd got the title wrong; It's "My Little Pony", not "My Little Ponies". I'm going to claim this was intentional regardless of the fact that I totally screwed that up for reals.

Yes, I have watched some episodes of the new My Little Pony show. Why would a grown man do such a thing? Because a ton of other grown men on the internet kept talking about how awesome they thought it was. I would literally have no idea the show even existed if not for witnessing a multitude of unsolicited praise.

Okay, I would've found out a few days ago on account of the first episode being free on iTunes and it being advertised on iTune's front page, but then my first exposure to it would've been a picture of Optimus Prime, a ninja from G.I. Joe, and a crazy-happy pink pony. That was somewhat surreal even with prior knowledge.

MY OPINION OF THE SHOW *THUNDERCLAP*

The show is shockingly good. It's what I would call a "family show" as opposed to a "kids show", the distinction in my mind being that a kids show is geared towards kids and is potentially aggravating for adults to watch. A family show, on the other hand, is still geared towards kids, but is done in such a way that adults can still enjoy watching it.

There are many reasons I'm shocked by the goodness of this show. For one thing, look at the full title: My Little Pony: Friendship is Magic. That alone is enough to set off one's gag reflex.

What's more, the ONLY thing inaccurate about the title is the "my" part. These ponies answer to no humans, which is easy for them to do seeing as there aren't any. Friendship is a huge part of the show, and each episode ends with a lesson about friendship. That's right: this show has clearly stated morals to every episode.

Not only that, but GET THIS! The ponies are mostly polite and nice to each other! They'll get into arguments and do plenty of rude things, but they're rarely rude on purpose, they're apologetic, teasing is almost always in good humor... IT'S MADNESS!

And yet, it's good. It's funny, it's cute, the characters are well-defined and fun, the writings solid, and the stories are good (if a little predictable from an adult's perspective). It's done so well that all the problems a show like this could easily have are small or not present at all.

In fact, the show being good has resulted in me doing a lot of thinking, and I mean a lot. I can't remember the last time a show made me think this much. One might have noted a bit of hyperbole a couple paragraphs back in regard to the politeness and niceness of the characters being madness, and that's the sort of thing I've been thinking about: why is that so weird?

I know how dull it can be when there's no conflict between characters, but you can have conflict, anger, and all the things that make a story good without making the protagonists mean-spirited jackasses. This show is living proof of that.

It seems like politeness and niceness in general is on the decline. Maybe that's just a result of looking at the world from where I'm sitting, but I'm not the only one who has expressed this sentiment, and TV shows, comics, movies, etc support it. I've gotten looks of shock from people by doing nothing more than saying stuff like "please" and "thank you". Seriously, what the hell?

To Conclude These Ramblings

My Little Pony: Friendship is Magic is a very good family show, and I think it could actually be a good influence on children (and possibly adults) without patronizing or boring them. The morals aren't too heavy-handed, the characters and stories are fun, and the amount of cuteness could probably be weaponized.