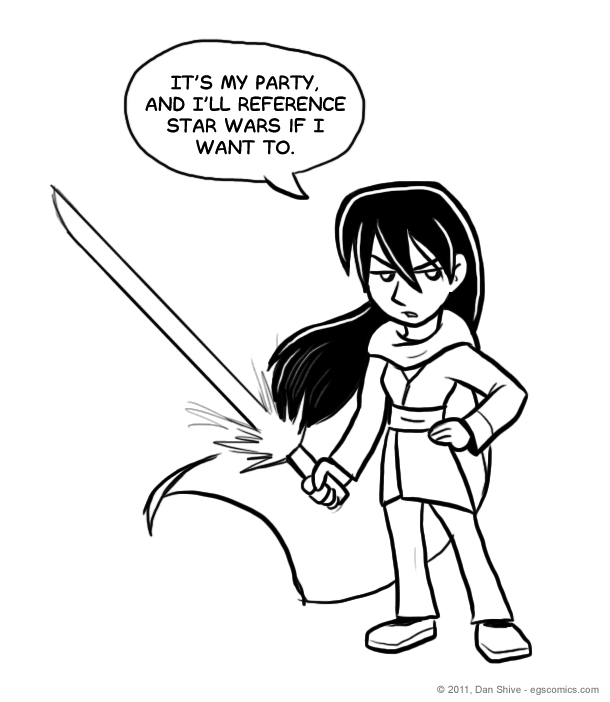 Posted February 10, 2011 at 1:00 am
In a recent story comic, I had Susan reference Star Wars instead of Star Trek. I was informed that this was a horrible and awful thing to do on account of the fact that she could have been quoting Star Trek given that she could have just as easily been quoting Spock or Data. There are a few reasons why I disagree with this assertion.

None of the suggestions I received referred to a specific moment in Star Trek when odds were given, nor can I think of a specific moment that stands out. I'm sure there are plenty of moments, but they blur together for me.

The Star Wars reference, however, was about a specific moment: Han Solo flying into an asteroid field. I didn't just pull the 3720:1 odds out of a hat; those were the odds C-3P0 gave Han.

Justin's comeback, "never tell me the odds", is also specifically from that scene. Again, I'm sure Kirk had his own witty retorts to being told the odds, but no specific moment stands out to me. Perhaps one would stand out to Susan, but it would probably have to be from the movies. Of the actual Trek TV shows, her favorite is Deep Space Nine. She certainly has a lot of respect for TOS, which is something I hope to elaborate on someday, but she doesn't necessarily have an encyclopedic knowledge of the Kirk-era TV episodes.

I could go on, but it boils down to this: Susan is not married to Star Trek. She's certainly a big fan, yes, but she is capable of enjoying other things, and that includes Star Wars. In fact, why wouldn't she be a fan of the first three Star Wars movies? Okay, I can think of a major complaint she would have about the third one regarding Slave Leia, but to this day I look back on Leia picking up a blaster in the first movie and fending for herself as a moment of badassery, and that would be far more substantial a moment for Susan.

Furthermore... wait, I'm getting the feeling some of you checked out mentally after I mentioned Slave Leia and Susan in the same paragraph. I should probably just go on record now that I won't be drawing Susan in that outfit. I would like to continue living, thank you very much.