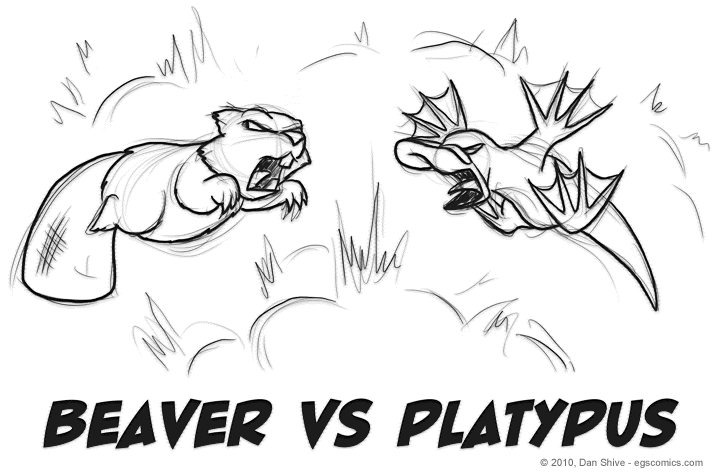 Posted June 15, 2010 at 1:00 am
In an effort to assist my sanity by getting rid of a lot of junk I've accumulated over the years, I came across an old comic of mine from high school while cleaning out a filing cabinet. It's horribly drawn and the only character shown is an adviser to the ruler of Canada, but it had a story that went as follows:

The ruler of Canada was tired of the United States making fun of Canada. He decided to teach the U.S. a lesson by unleashing his army of ankle-biting beavers. His adviser, however, pointed out that the U.S. had crotch-biting dogs.

Discouraged, but still wanting to prove Canada to be a strong nation, he asked his adviser what Australia's army was. "Platipi", the adviser replied. This pleased the ruler of Canada, who decided to unleash his beaver forces upon Australia.

Unfortunately for Canada, the platypi had a secret weapon: poison barbs on the hind ankles of their males. This gave the platipi the edge they needed to drive back the beavers.

Before anyone thinks too harshly of me, I wrote that story back in High School. At the time, I found it odd that Canada was the butt of so many jokes (I still find it odd), and I also thought that thing about poison barbs on the male platypus was frikkin' awesome.