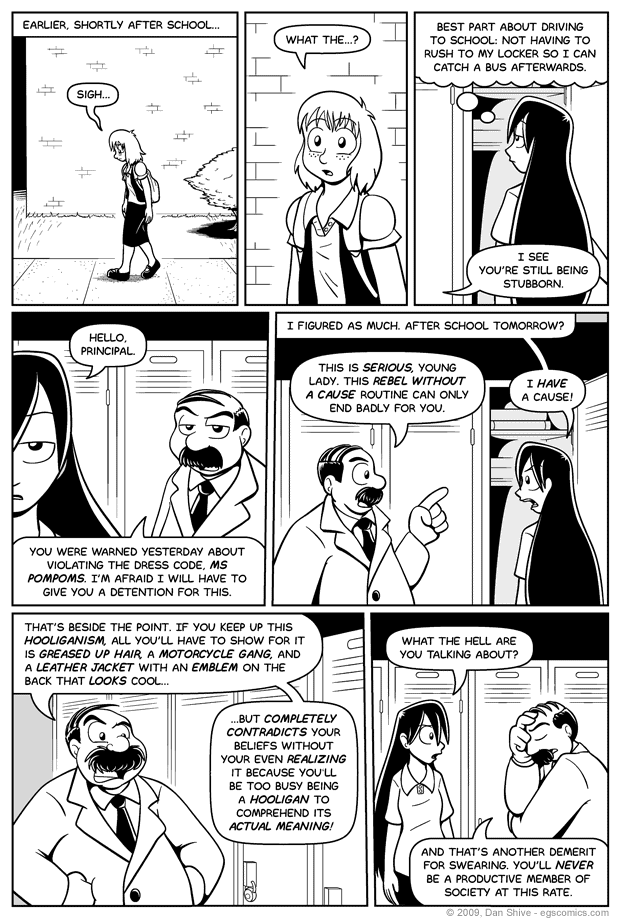 I have plenty to say about what is actually happening in this comic from the perspective of the story, but I doubt that’s what everyone is wondering. No, it’s clear what’s on everyone’s mind: Catalina’s hair. Now look, I’ve explained this before: her hairstyle is different than the previous day because she’s bummed out and didn’t bother to do much of anything with her hair that morning. See? Very simple.

What many might not have noticed is the sudden shift from color to black and white. There were several reasons for this change, most of which having to do with me enjoying the creation of the comic and keeping up a schedule.

For one thing, I don’t really enjoy doing color comics. I might enjoy coloring one or two specific panels, but then there are the rest to deal with. I’ve found that I like to color singular images, but not sequential art. That’s a term I avoid using because it sounds pretentious to me, but I feel it fits here because I’m specifically referring to coloring a sequence of images instead of just one, and I generally don’t have fun doing that.

Now that I’ve brought it up, does a single panel gag cartoon count as sequential art? I’m taking a sequential art course this semester, so I guess that’s one thing to ask about.

Anyway, I DO enjoy working in black and white. A lot. It’s just more natural and fun for me somehow, and that’s what EGS is SUPPOSED to be for me. I’m studying to do graphic design for other people, but EGS is meant to be the project I do where I only answer to me and do it the way I want to do it and have fun with it. While I wouldn’t object to it somehow paying all my bills, it is not my job. It is a hobby with benefits, and should be treated as such.

Black and white is also faster to do. I really want to have three comics a week again in spite of outside responsibilities, and it could realistically happen if using this style. I want to get through stories faster so I can get to all the other stories I have planned!

There’s also a new font, one that I made myself, but I’ll rant about that in a future commentary. I have plenty to say about it, but this commentary is already long and I want to address things specific to this page.

This page has had many versions to it, and was almost left out. It occurred to me that, in spite of being a key antagonist in it, North’s principal had not shown up at all during the Sister II arc, and it was high time he did. In addition, Susan had not yet been punished for violating the dress code.

As for different versions, this is the most ridiculous one and the most accurate portrayal of who the principal is supposed to be. He’s a guy who cares, tries hard and means well, but is completely nuts.