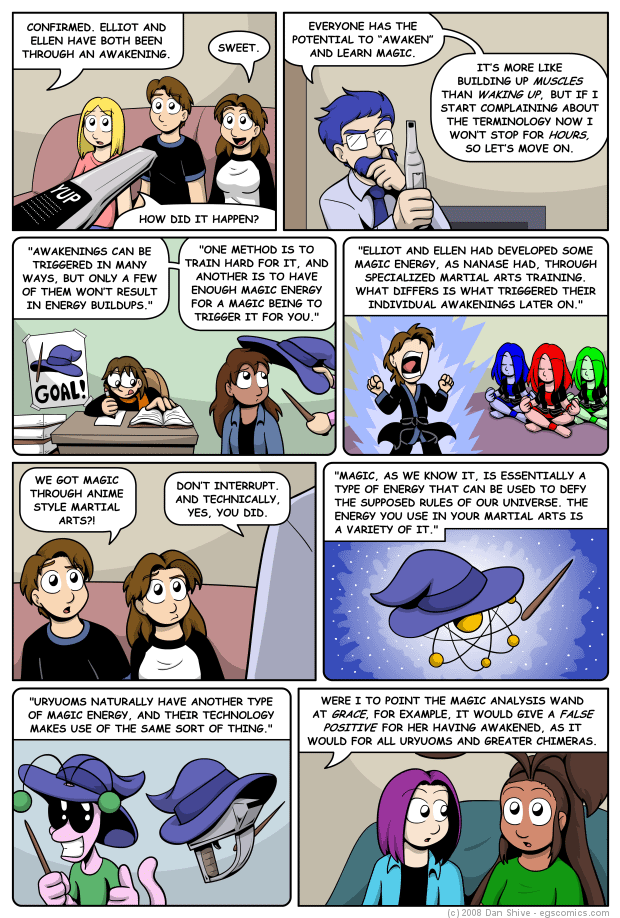 Posted November 13, 2008 at 1:00 am
A commentary so long, it needs categories! …Or, at the very least, there are a multiple topics to discuss.

The presence of a magical power behind so many things may very well seem like a dramatic revelation and/or change, a sinister retcon determined to tear the EGS universe asunder. In truth, however, this is more of a confirmation than a [[wp:retcon]]. Okay, to be fair, a retcon did take place. It’s just that it was back in 2002 during the first Sister story arc.

The transformation technology was originally intended not to have anything to do with magic. I always figured that the anime martial arts would be related in some way, though I didn’t initially know how it would be. The relationship with magic for both, however, was solidified once I decided upon the Dewitchery Diamond for Ellen’s creation, and once I determined how Nanase and Susan got magic. Both date back to the first year of El Goonish Shive.

First off, the anime style martial arts. I wanted there to be a reason why Nanase’s magic was better than Susan’s. It’s evolved a bit since then how exactly their magic is different, but the basic premise that Nanase got more powerful magic due to already having magic energy as a result of practicing Anime Style Martial Arts was intended even back then.

As for the TF gun, there has often been the question as to why the Dewitchery Diamond treated Elliot’s transformation as a curse. This page indirectly answers that. The effects of the beam were related closely enough with standard magic and spell casting for it to count as a curse.

The first hat and wand visual I thought of for this comic was equipping some representation of energy with them, and it grew from there. I love the visual, though the TF gun may rival it. In any case, I’d love to have a wizard’s hat of my own, but have thus far failed to find one I like.

I do, however, own a wand. It’s not so good at casting magic, but it did have the distinction of being the least expensive wand one can order from Alivan’s. A more expensive one will be the second thing I buy after a new hat once I'm rich. And no, not a wizard's hat. My official "I'm successful!" hat will be a fedora or something like it.

The hats are all specifically blue for a reason, that reason being the wizards that came with LEGO Dragon Master castle sets. Needless to say, I had a lot of fun with those blocks. I think the wizards were supposed to be evil, but one would wind up with multiple wizards and I’m betting I had at least one I pretended was good as far as my kingdom’s mythology was concerned, along with his noble dragon companion.

Yes, that’s right. My LEGO kingdoms had their own characters, plot and backstory to it. I don’t remember it clearly now, but it was before even the early days of EGS, so I’m certain there were plot holes all over the place.

I think physics experts will take issue with the term "magic energy". I’m not actually certain, but then I didn’t do well in that one high school Physics class I took. I would therefore like to note that the term is being used her in a loose fashion due to Mr. Verres wanting the people in the room other than Tedd, and possibly Grace, to understand.

Unless, of course, I’m wrong about there being in an issue, in which case Mr. Verres is saying exactly what he should in order to sound like a smarty pants.

The people shown in the fantasy panels are nobody in particular. Well, Ellen and Nanase are, but my point is simply that there’s no need to wonder for hours who that girl is in panel three. Yes, she’s cute, but most people are in my art style. My guy (I think he’s a guy) with her in that panel is clearly a fan of Harry Potter, but that could be any number of millions of people.

I think it would be funny if that was all the magic analysis wand outputted, but there are plot reasons for it to say more. Such is life, but I think it still works as a joke. And just so all of you can sleep at night: it would say "nope" if they didn’t have any magic.