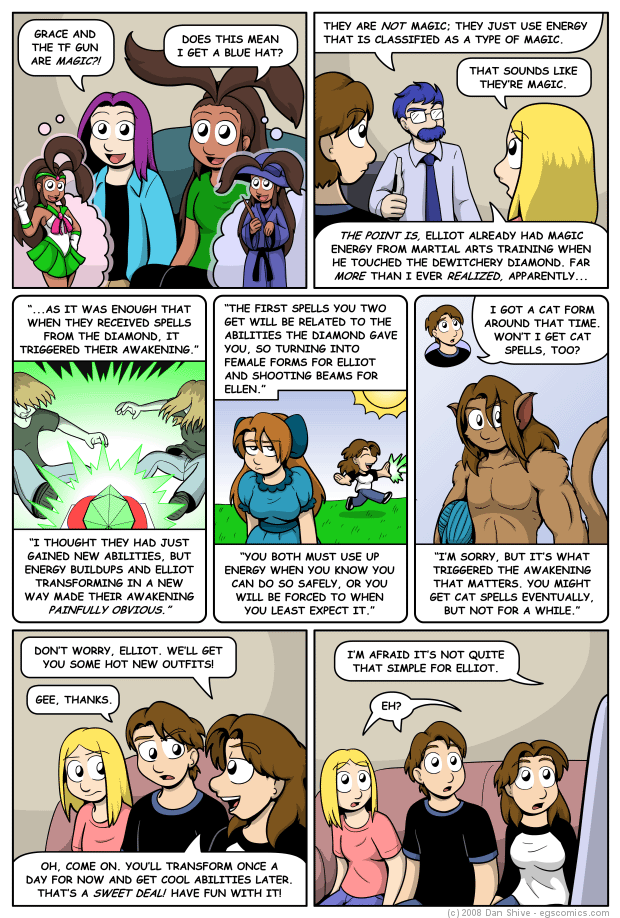 Posted November 18, 2008 at 1:00 am
This is the sort of comic I enjoy drawing, at least when it comes to parts of it. I don’t enjoy drawing lots of people sitting on a sofa, as I fret too much over proportions, perspective, etc., but I do enjoy drawing the characters in various fun forms and outfits. Panel one didn’t necessarily require the visuals of magical variations of Grace, but I have difficulty imagining the comic without them.

This comic may feel like mostly summary, particularly to the hardcore fans, but there are some key things here. For one, precisely why Mr. Verres didn’t realize Elliot and Ellen could have awakened sooner, and why Elliot is starting out with girly spells without cat spells. Granted, one could figure out without this comic why Elliot wasn’t getting cat spells, but that’s dependant on how one interprets Nanase’s earlier "related to the incident" line. Why Elliot isn’t getting kitty spells has been asked quite frequently since that comic.

Speaking of which, I’m betting this comic is a bit bitter sweet for fans of cat Elliot. Yes, it includes an image of shirtless cat Elliot being shirtless, but it also confirms that there won’t be a bunch of kitty Elliot spells any time soon. Part of the reason for this is that Elliot would enjoy getting new cat spells, and this whole situation is intended to take him outside of his comfort zone. While it would be neat to see Elliot going all catty in various way, it would be less of a burden for him, and we wouldn’t get to see him deal with it in public, either.

Given that this comic ended on a cliffhanger of sorts, I don’t have much to say about it that wouldn’t be a spoiler, so I’ll just answer this question: why is "girly Elliot’s hair lighter than manly Elliots?" There isn’t really a logical reason within comic continuity, but from a personal perspective, I thought he’d appear a little more girly with lighter hair. This wouldn’t apply to everyone (probably not most people), but in Elliot’s case, I think it does.