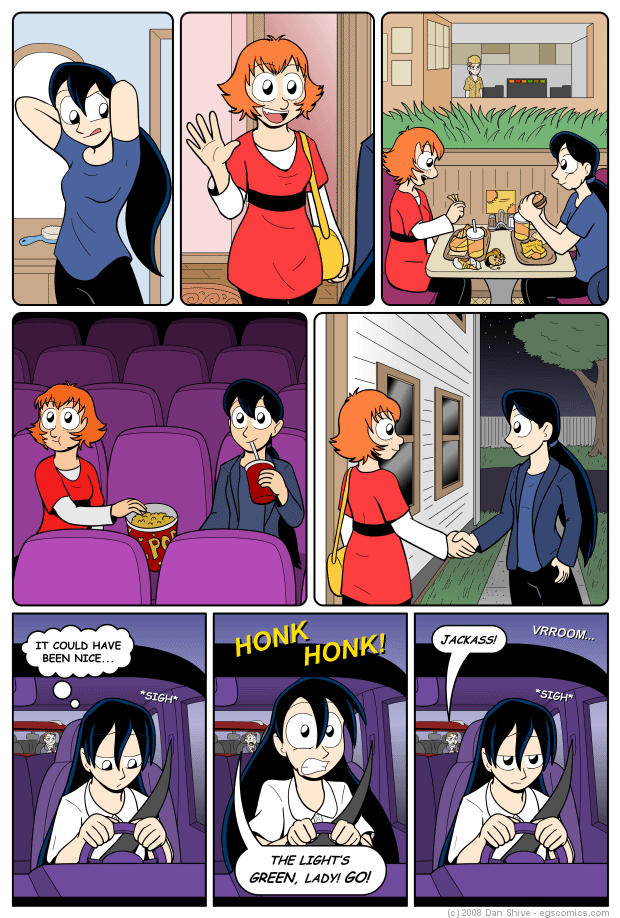 Posted June 9, 2008 at 1:00 am
One might notice Catalina's hair is a bit different from before in this comic. Originally, Catalina's hairstyle was meant simply to be cat-like, and while I figured it would be somehow possible as a hairstyle in reality, I didn't quite know how it would work. A bit of fan art, however, has helped with that:

It turns out that the artist is a hairdressing student, explaining how one could manage the riddle that is Catalina's hairstyle. It's a great bit of fan art, and it helped inspire improvements to Catalina's design.

Speaking of hair, I like Susan's hair tied back like that. I think it works well as a "special occasion" hairstyle for her.

In panel three, there is a small toy. This likely came with the meal, and is based on a critter I designed for fun a while back called Bowlbit. I've decided it exists amongst various other media parodies in EGS, such as the Lucky Bunny Bounty Show. I'm not sure if it would have its own franchise or be part of something else, but it's round and cuddly, so there it is.

While on the subject of panel three, it was, by far, the most time consuming panel I've had as of late. I should have just had them done eating, having already thrown out their wrappers, and inexplicably remaining in the restaurant with nothing bothersome to draw on their table, or any place to order the food in the first place. And while I'm speaking of this subject of which we are on in regards to panel three, that green stuff is that weird fake plant life some restaurants have. You know the ones.

I know the theater is rather empty in panel four. I considered filling it up, but then I realized that this is Susan's fantasy. Being Susan, a theater free of anyone else other than the people she wants to be with would be ideal. I fully embraced this excuse to be lazy and left it as it was.

One place I could NOT be totally lazy was the last three panels. Yes, there's image reuse, but it would have been easy to exclude showing the other car, let alone the man inside. The reason he's visible is to make it clear, beyond a shadow of any doubt, that the person calling Susan a jackass is NOT somehow Catalina. The frequency in which she's said "jackass" makes the last little joke possible, but it also makes it so even I suspect it might be Catalina if "jackass" is said without making it clear who's said it.