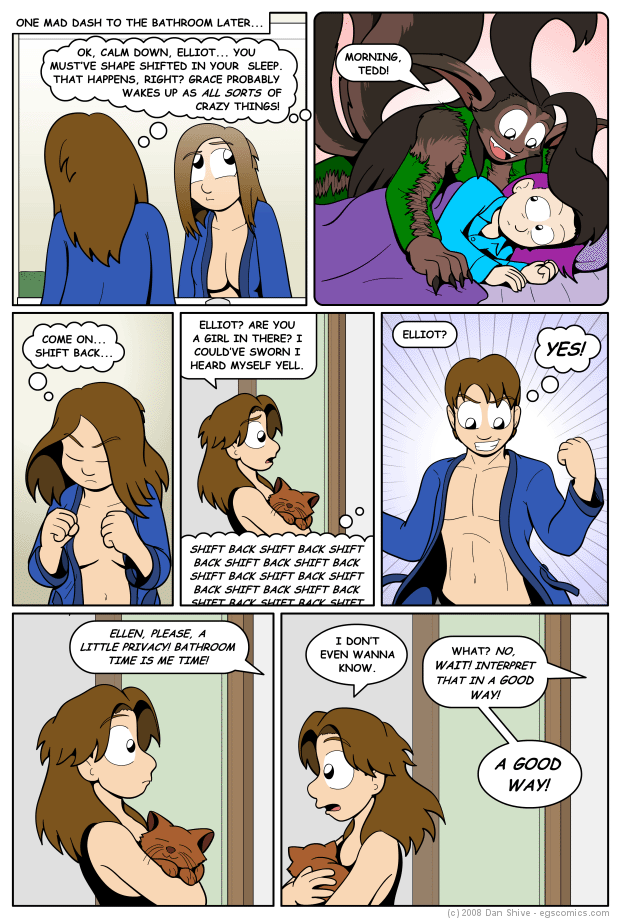 Posted June 6, 2008 at 1:00 am
I had intended for Elliot to be picturing Grace as a male version of Grace's "Omega" form, but so much of Grace is obstructed that I suppose she could also be interpretted as a muscular female variant. As per usual, interpreted however you see fit! It's not like I could stop you, anyway.

Much like when [[2008-04-11|Ellen zapped herself after sneezing]], this must seem as though the situation was very easily resolved and inconsequential. It is not inconsequential, but I get how it might seem that way at this point.

It's been a while since we've seen Brownie, the Dunkel family's cat. It has been even longer since we've seen her in color, as I can testify to after a mad hunt for color references of her while making this comic. Her shading has been upgraded, but I needed a starting point and it took me a while to find it.

As much as I like the last joke in this comic, a joke born out of writing the script and realizing what it sounded like Elliot was implying prior to intending it as part of a joke, I have a feeling it's going to result in more work for me in regard to moderating my forums the weekend after it's posted. In case any forum bunnies are reading this, notice how the comic leaves it to the interpretation of the reader, and is somewhat vague? Let's keep it that way.