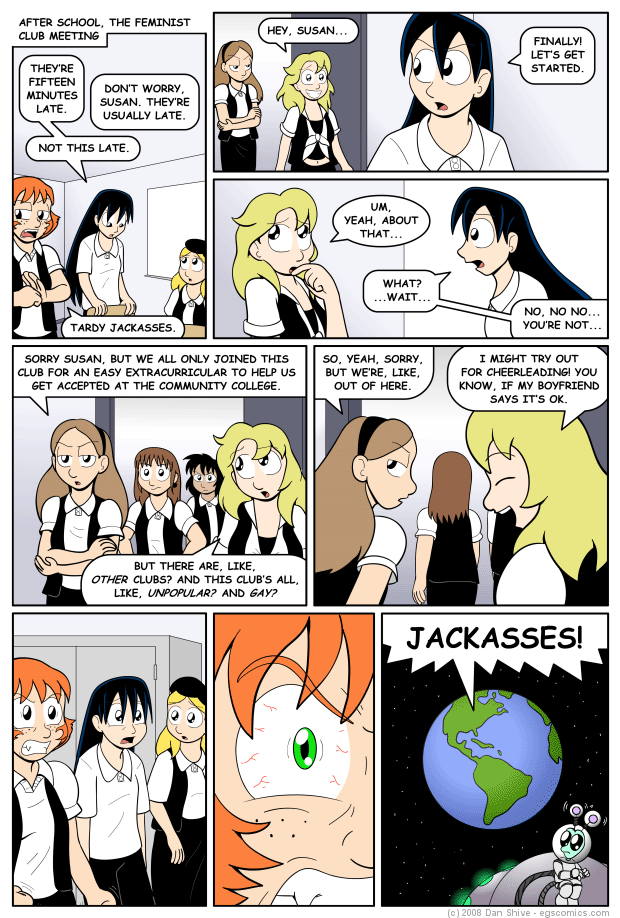 Let this be a lesson for all of you out there: DON'T SKIP MEALS. If Susan had a full stomach during this comic, she may very well have had the energy to put up a fight in the face of over half the feminist club leaving.

Admittedly, it wouldn't have accomplished anything and would have extended this scene to possibly two or more comics and wouldn't have effectively shown how fatigued Susan is fast becoming, but that's besides the point. EAT YOUR LUNCHES!

In case it wasn't obvious, the basic idea here is that only Susan, Sarah and Catalina actually really cared about the club, and that Susan was likely deluding herself thinking that these four would be willing to go out on a limb to try and make a difference. This is a definite blow to both Susan's will to fight and her self esteem, but there's more to it than even that. What more is there, exactly? Next comic.

The non-Sarah blonde in this comic is dressed in a style reminiscent of Britney Spears way back when the most disturbing things about her were her status as jailbait and popularizing the baring of midriffs, the midriff baring being very much a double-edged sword on more levels than I could possibly hope or want to address here. Whether she has merely gotten away with this by luck or has been granted special permission, as did Sarah with her beret, is unclear, but let's hope it’s the former. If it is the latter, we can at least take comfort in the fact that I decided to have her wear a black shirt underneath her white one.

This outfit choice was done to further emphasize that this girl was out of place in a feminist's club. Granted, being a feminist does not automatically mean one will not expose their belly button (as Susan used to for whatever reason), nor does the role instantly demand a great deal of modesty, but the point with THIS specific girl is that she has no issues flaunting her stuff and will gladly portray herself as a sex object. Granted, nothing that she says or does in this comic explicitly establishes that, but I'm counting on all of you to unfairly judge her based on this one brief encounter.

You should be ashamed of yourselves.

Speaking of the alien in the last panel, even though we clearly weren’t, this little space guy’s hearing Catalina’s cry of outrage is obviously an exaggeration and not actually happening. Arguments about how Uryuoms travel in space, and whether they use saucers, should NOT use this page as a reference. I’m aware this may sound presumptuous, but I have actually witnessed these debates already. I can only hope those nerdy enough to debate Uryuom space travel are ALSO nerdy enough to read this commentary.

Incidentally, even before I ever drew him in any pose, I for some reason kept envisioning that Uryuom in the last panel fishing. No water, no terrain to speak of. Just fishing. Somehow. In space. I chose not to go through with having him fishing because I could not explain why, or even how, he would be fishing, and I felt it would be a source of unnecessary confusion in what should be a fairly obvious joke.

I also suspect that the likely reason it’s stuck in my mind is because someone else did it before me. I cannot recall such an instance, but the whole "cut to a shot of the Earth and show a startled alien" has been done many times before I got to it, and it is possible that somewhere out there is an image already in existence of an alien inexplicably fishing in space while someone shouts from the earth.

The "I’m remembering something I’ve already seen" excuse, of course, is much more preferable than the other explanation, which is simply that I’m insane. That is the only real other alternative, after all. I mean, fishing? In space?! MADNESS!