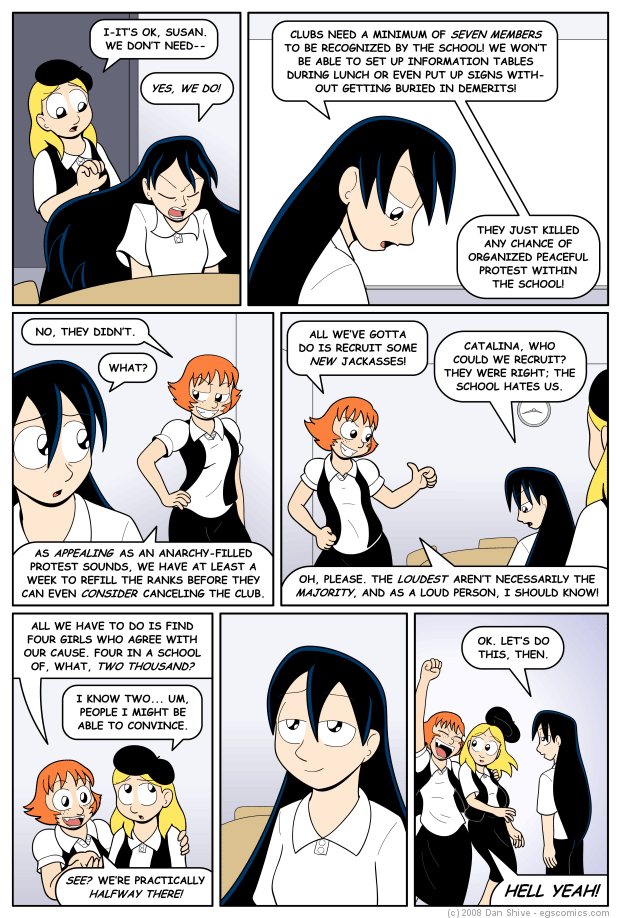 Posted May 9, 2008 at 1:00 am
See? Less than 2% of Catalina's words in this comic had anything to do with jackasses. The girl is capable of leaving the word out of her sentences after all!

And so it is revealed that Susan's club had the bare minimum membership required to be recognized as a club by the school, thus putting restrictions on how they fight the system, their ability to meet within the school, etc.

Susan might be a bit overly dramatic in panel two. She's technically correct about setting up tables and flyers if one goes strictly by the school guidelines, but it's realistic that the school just wouldn't care. It's one of those rules that you'd find buried in the school handbook they give out on the first day of school and lost the next day in favor of a day planner featuring the cast of whatever TV show is hot that season.

Nonetheless, the girl is stressed and trying to work within the system to affect change, and the thought of losing the club does not put her in a happy, clear thinking place. Susan is the sort of protestor who wants to be respected and taken seriously by her opposition, and is much more likely to be lawful than chaotic in her efforts (D&D alignment reference? NERD!). The most "unlawful" thing she's been willing to do thus far has been wearing a male uniform.

And there's no reward for guessing who the two people Sarah is thinking of.

Incidentally, I adore the last panel. It's not my best drawing of Susan, but I'm quite pleased with how Catalina and Sarah turned out. Yay flying berets!