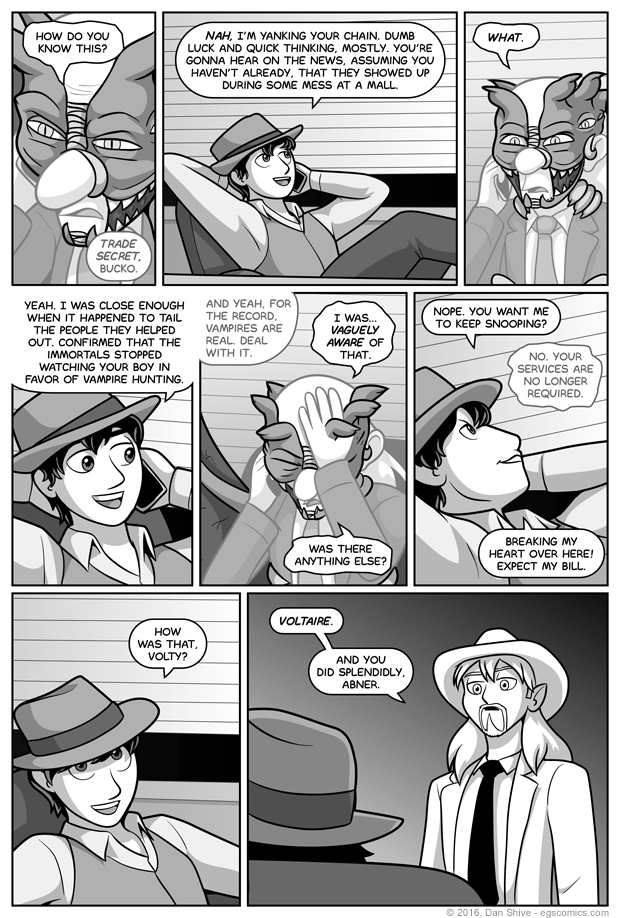 I have been waiting... Hang on a second. OVER SIX YEARS to have Voltaire in this comic. I can't elaborate much on that, but I just needed to get that off my chest.

Abner, on the other hand, wasn't a planned part of this story, or any story, until very recently when I realized that it made absolutely zero sense for Voltaire to have direct communication with Sirleck. I will elaborate on at least a couple reasons why in the next commentary, but a middleman was absolutely necessary, and I was alarmingly slow to realize that.

As for Abner's design, if I was going to have a magic savvy private investigator, he was going to have a proper hat, darn it. This hat, however, presented a problem, for VOLTAIRE has a similar hat! I needed to make absolutely certain the two could not easily be confused for each other in spite of similar hat preferences!

This may seem like a silly concern, but some people recently suspected the spider vampire of being Tensaided, so I'm calling it a 100% legitimate, red alert, shields up, prepare sick bay to receive Worf scenario.

Anyway, I think they look sufficiently different, and I like Abner's curly black hair, so there. I also like his character. It's 100% born of his role in the story, but hey, I'm a sucker for classic film noir. I haven't even seen that many movies in the genre (this must change), but when I catch just a bit of it on TV, I'm like a fly caught in a mystery's web.