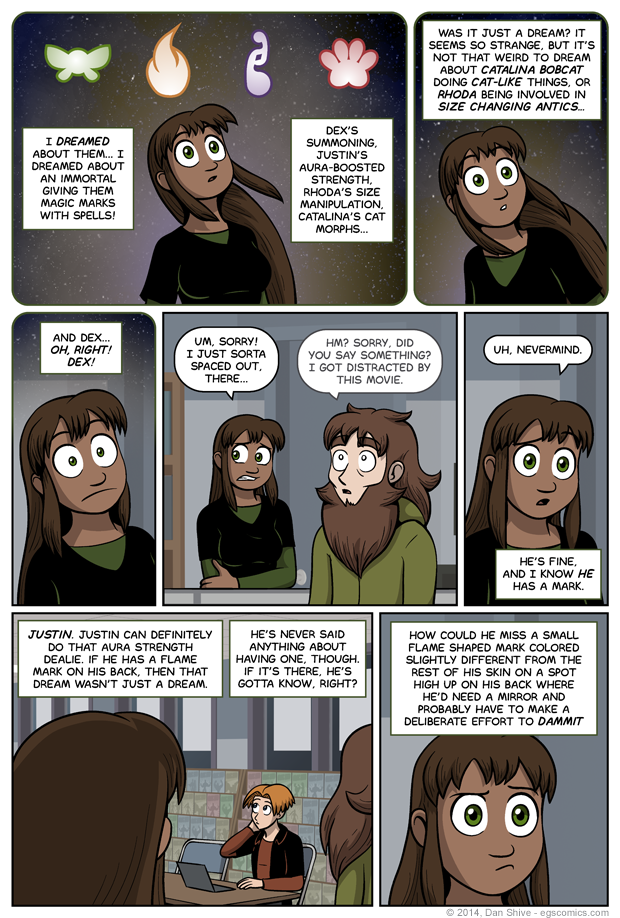 - Rhoda and size differences
- Definitely has a mark
- Dream?

I'm pretty sure some readers initially thought Catalina was a cat girl from the beginning. At least, I like to think some people did. She's certainly written as though she were some manner of human cat.

I have been asked many times how Justin could go without noticing the flame mark for several months. Assuming he didn't go to the beach over the summer (he didn't), the answer is "easily". Unless Justin has a habit of removing his shirt in front of people who are likely to observe his back and share said observations, or posing in various twisted poses in front of a mirror, a small, low contrast mark between his shoulder blades is something that can easily be missed.

Now, to be fair, in the comic where I show the marks, they are super easy to spot. This is because I wanted readers to be able to see them clearly without any difficulty across several monitors with varying settings throughout the universe. In short, I upped the contrast (which everyone should have automatically known because REASONS).

And yes, Grace swears more in her thoughts. Just a little bit, though. Her thoughts could probably be aired on prime time television just fine for the most part.