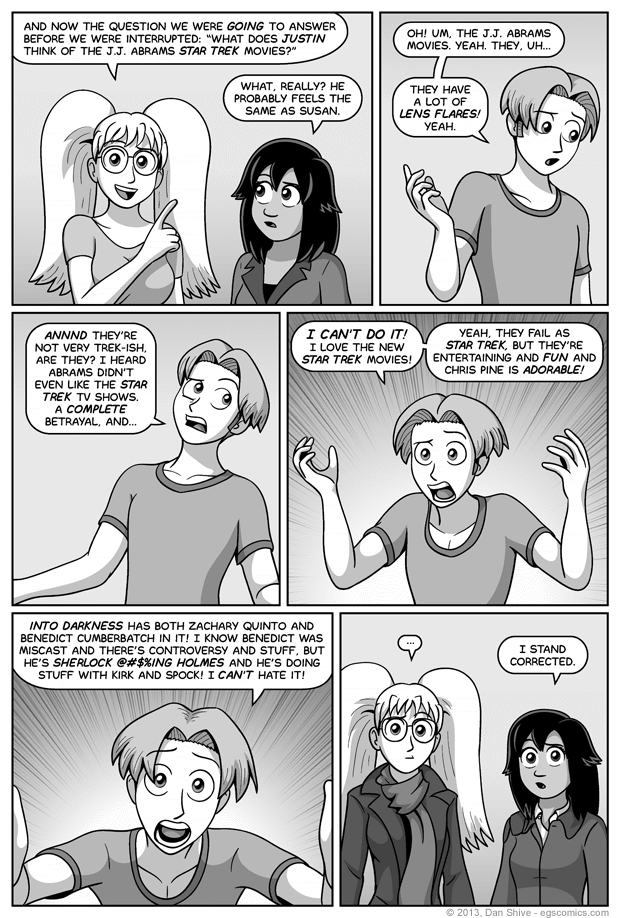 Justin likes Star Trek too, darn it! He's also into a wide variety of "nerdy" things. Justin can more easily appreciate guilty pleasures than Susan can, and he's also more likely to check out whatever's popular in geekdom at the moment because you can bet whatever it is, he's had to hear about it while working at the comic shop and will have it least given it a quick look if for no other reason than to have some idea of what the heck everyone is talking about.

That said, it was pretty much a given that Justn has seen the BBC's Sherlock in which Benedict Cumberbatch plays Sherlock Holmes. Amanda in the last panel is dressed in a manner that Sherlock has dressed in, and Lisa is, of course, dressed as Watson.

And hey, now's as good a time as any to rudely try and classify the variety of nerds / geeks / whatever in the EGS main cast!

I'm not sure if Elliot or Ellen "qualify" for anything. Elliot watches a bunch of movies with Susan, now. Maybe that counts. In any case, this list isn't intended to define any of them. I just thought it might be interesting.