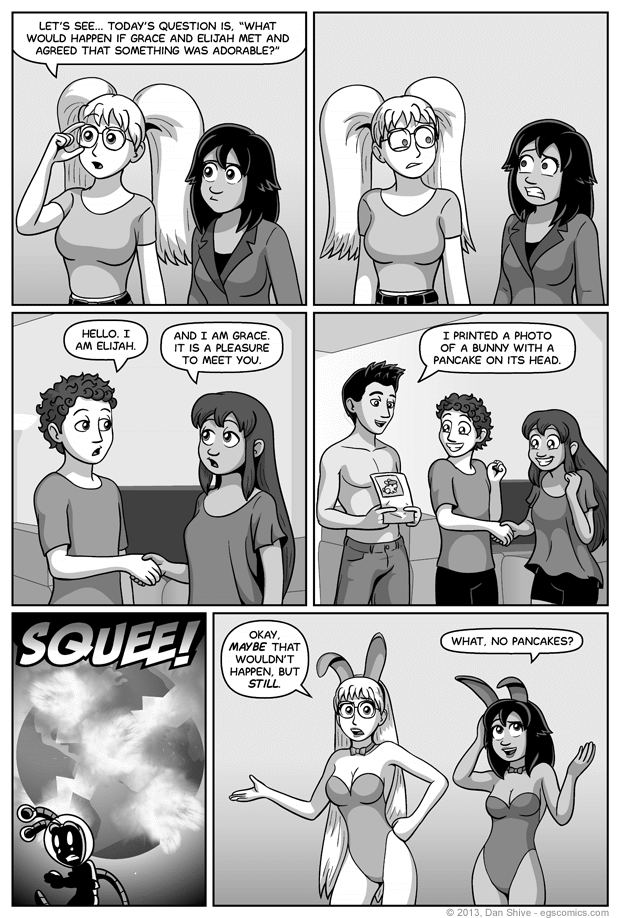 This is my favorite Q&A comic ever. Maybe you don't like it as much as I do, but that's okay. It just means you're wrong.

You might be wondering why Rick isn't wearing a shirt in this comic. A better question is, why wouldn't Rick not be wearing a shirt? It's a common state of being for him (when it isn't, you know, winter).

I'm also making up for the fact that I never got around to showing a partying Elijah without a shirt at the party. It's something I had planned to show, but then we got to his, Rick and Rhea's last appearance of the storyline and I wanted them as immediately identifiable as possible and I wasn't willing to give up the lampshade. Granted, this is Rick, not Elijah, so maybe this doesn't make up for that.

Speaking of Elijah, I think this is the first comic in which I've been happy with his hair. I'm also really enjoying Grace's revised look. She hasn't looked "Grace-ish" enough to me for a while, but now I'm looking at her and I'm all like "that's Grace! YAY!"

Oh, and for the record: I chose the bunny with a pancake on its head before I thought of putting Amanda and Lisa in bunny costumes. I originally thought this comic would end with them not changing in any way, but then the obvious solution hit me like an obvious ton of bricks.