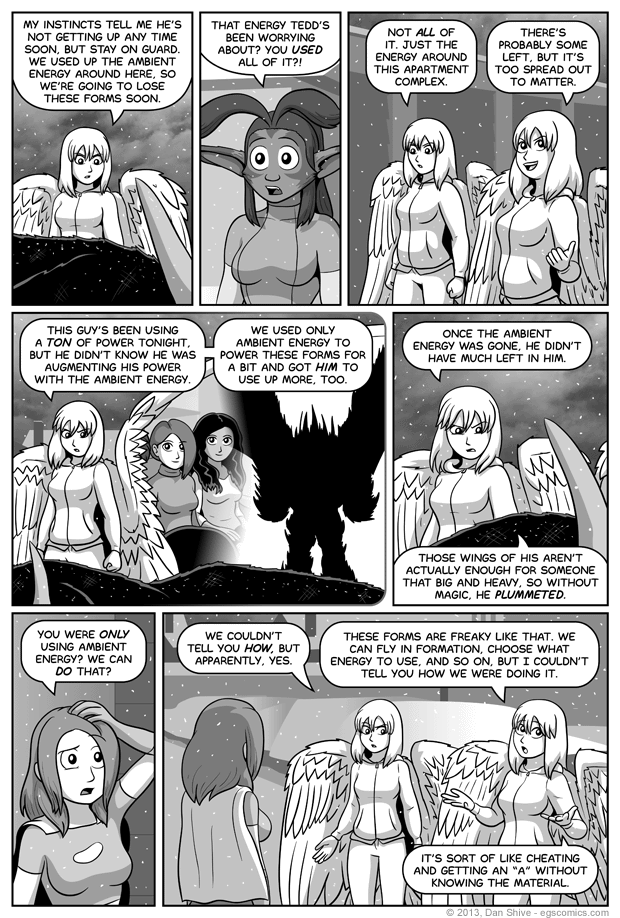 Granted, Nanase didn't know he was going to go all Super-Not-Tengu, but as she points out, dude needed magic to keep flying, and flying fast enough to give chase would logically use more energy. The wings probably made flying easier, but this guy probably weighs more than a grizzly bear, and grizzly bears can't fly, darn it!

At least, I don't think they can. I meant to watch that special on grizzly bears, I really did, but I got distracted and then it wasn't on demand... I mean, I'm pretty sure they can't fly. That would probably be common knowledge if they could.

(I apologize if bears can fly)

I don't know which one to sh--er, is talking!

I wanted it to be apparent from her expression and body language that, in each panel of this comic with only one Nanase, it is the real Nanase who's talking. Just in case it's not, however, that's Nanase talking in panels one, four, and five of this comic. In panels three and seven, Nanase is on the left, Ellen on the right. They have not being playing musical Nanases with their positioning since the previous comic.

Okay, I have to turn something like that into an in-comic party game at some point. Every guest but one assumes the same clone form, they run around until the music stops, and then the unchanged guest tries to guess who's who? I can see Tedd and Grace at least trying to convince people to go along with that.

A reader was recently wondering whether Grace, Cheerleadra, or Angel Nanase was the most powerful. The answer to that question is up in the air, but I would argue that Angel Nanase is the most dangerous. She may or may not be able to hit the hardest, but she's basically flying around with an automated guide, and she can use both her wings and her tails to defend and attack.

Of course, Angel Nanase would be racing against the clock in this hypothetical scenario and could wind up self-KO'ing, but I'm still leaning towards the automated guide working at the speed of reflex as being the biggest advantage among the three.