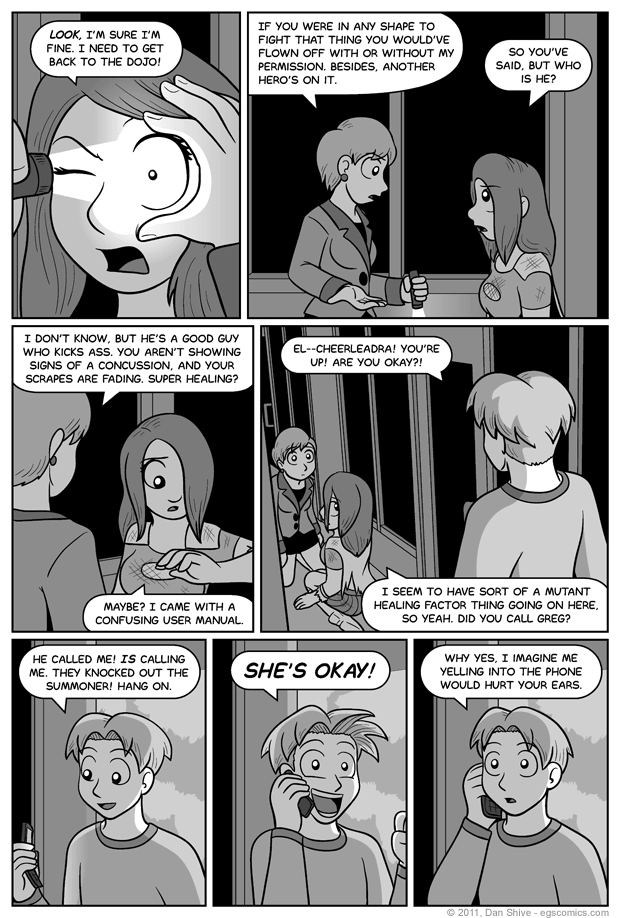 I'm not an expert on concussions, but one thing I do know is that one possible sign of a concussion is an eye not responding properly to a light source, which is what Melissa is testing in this comic.

Being the paranoid worrier that I am, I once tested myself in this fashion (using a mirror) after I was hit from behind while stopped at a red light. I didn't hit my head hard, but I did hit the back of my head on my seat's headrest. I didn't really think there was much chance of it, but I was somewhat shaken by having been hit in the first place, and as I said, I'm a worrier. If I was really all that worried, however, I'd like to think I would have gone to an emergency room.

Incidentally, I've been in two car accidents, and both times were getting hit from behind while stopped at red lights by young women who accelerated before the light was green. I'm not judging all young women drivers as a result of this or anything, but I do find it really weird.

I was very close to turning the end of this comic, and consequently the next comic, into detailed back and forth recaps of what basically just happened. It's the sort of thing I can do without realizing it when there are simultaneous events going on, but I caught myself in time.

Of course, there are lines that could be considered recapping, but if you consider Justin saying "they knocked out the summoner" in the context of this comic a recap, you have VERY strict recappery standards.