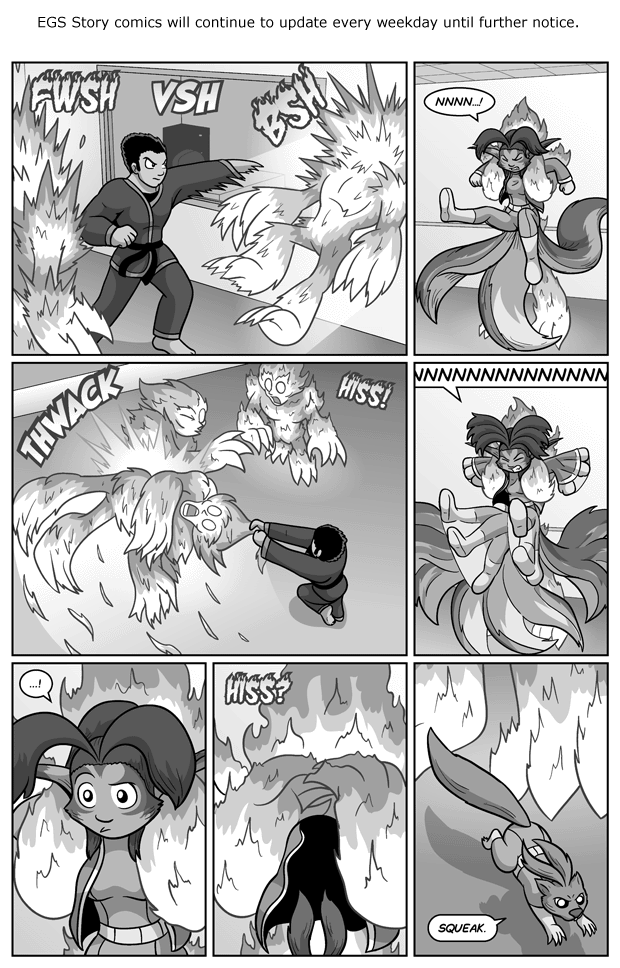 Up until drawing it, I did not know it was physically possible to grab the top of of a fire dude's non-fire fiery heads and swing them around. Shows what I know.

I initially drew a bunch of action lines around Grace's various movements, but it looked like I had just savagely attacked the artwork with a pen, so I took them out. I think it looks better this way, but it also sort of looks like she has nine tails in that one panel...

Back after I posted the "FWSH" comic, some readers questioned why Greg didn't get put into a full nelson, too. There's a simple explanation for this: Greg is a martial arts master (by the standards of "martial arts I can draw", anyway). Even I know one way to escape from a full nelson. Greg probably knows half a dozen.

Please note that full nelsons are very dangerous and one can still get seriously hurt, paralyzed, or even killed, by a full nelson. According to the infallible Wikipedia, it's banned in amateur wrestling due to its potential use as a limited neck crank, and according to someone who e-mailed me, the full nelson was developed in WWII as a means of breaking people's necks. If someone has a source that can confirm this, I'll update this commentary to reflect it, but that is something it's capable of doing regardless of origin. In short, don't do it.

My point is simply that it's not an inescapable hold, and Greg in particular would not be stopped for long by it. Granted, it appears he wasn't stopped for long ANYWAY, but that's enough out of you!

In defense of Grace, however, I'm not sure what technique(s) would work when one's feet aren't on the ground. The one I know involves moving your legs and upsetting their center of gravity. That sort of counter might still be possible from Grace's position, but this is what she's doing instead of her first real martial arts lesson, so... yeah.

All that said, one could use the knowledge of full nelson escape moves to nitpick the Dragonball Z manga / anime and the fact that a super powerful martial artists from space was apparently incapable of escaping one when his life depended on it, but there's really nothing to be gained by it. Judging the martial arts accuracy of Dragonball Z would be like judging the scientific accuracy of EGS. It's just not worth it, dude!