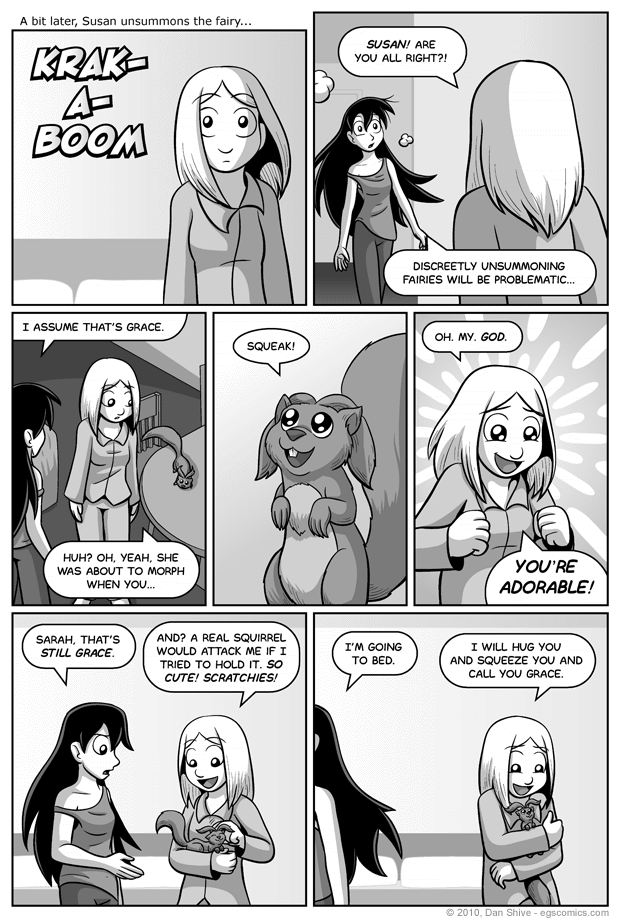 The "a real squirrel would attack me" line is both part of why Sarah is excited to hold squirrel Grace and the result of a twinge of responsibility telling me to effectively imply "don't try this at home." Squirrels may be small and cute, but they are wild animals with proportionately large claws and teeth and they WILL use those to harm those who would grab them. If you don't want a bucktooth-shaped hole in your hand, leave wild squirrels alone.

*cue "The More You Know" theme*

One could argue that this comic isn't necessary for the plot. They would be right. I could have glossed over this moment entirely without ultimately affecting anything significant. Anything in this comic that might be plot relevant could have been covered by one or two lines of dialogue in a later comic.

That said, I like this moment, and I think it's a worthwhile one to have. We've rarely seen 100% squirrel Grace, the form's been given a new design,I like Sarah being overwhelmed by Squirrely cuteness, and that's just the tip of "the reasons I bothered with this moment" iceberg. It also works as a transition to what's next, so there. NI!

But don't worry! We're on the verge of the exciting cave troll reveal!