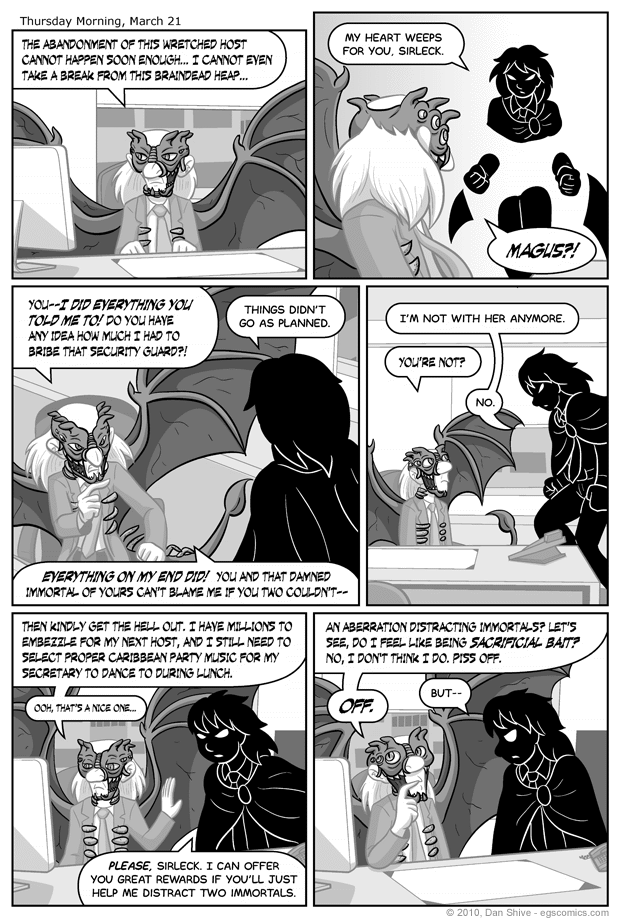 Recap: T-Minus is a storyline broken up into smaller installments that focuses pretty much entirely on antagonists.

"Sirleck" is an anagram of "Lickers". "Stone Lickers" is the literal translation of Lamprey. Lampreys are blood sucking parasites, and Sirleck is, in essence, named after them.

Sirlecks dialogue was going to be white on black as it was originally, but when I shrunk down the comic with this new "creepy" font, my eyes cried out with RAGE. They attempted to flee from my skull and start an autonomous eye colony in Hawaii. The font bubbles and how much I drew (and didn't draw) was based on the font sizing and this was a last minute realization, so I decided to just make it black on white. At least it's a creeeeepy font, right? ...Right?

Speaking of Sirleck's dialogue, you might have noticed that his host's mouth isn't opening. That's because this comic's dialogue is all occurring on the spiritual plane. That guy that Sirleck's on? He's not saying anything in this comic. If his secretary (er, personal assistant) were watching, it would just look like her boss was silently striking random poses.

Also speaking of Sirleck and creepy things, this comic implies that Sirleck is an aberration. This has somewhat disturbing implications.