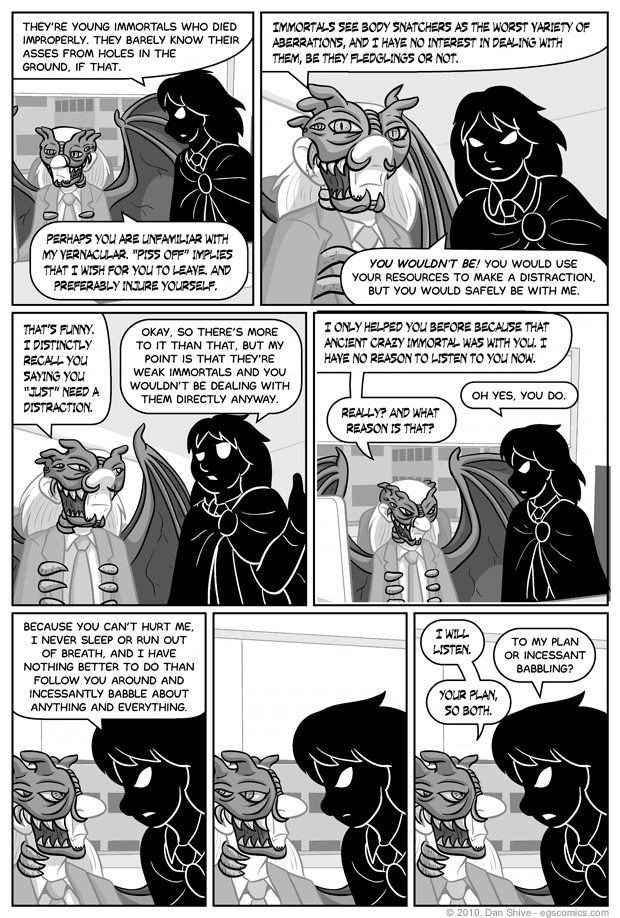 Posted August 11, 2010 at 1:00 am
I've used this threat before. Well, sort of. "If you distracting the driver gets us killed, I am SO going to haunt you!" That sort of backfired, as the other passenger decided it would be cool to have his own ghost, and I admitted that we probably would have some fun times, but that's beside the point.

I was tempted to have a "you're bluffing" followed by a "five days later" sort of gag where Magus would have followed through on his threat, but the logical flaw that Magus could have just shared his plan repeatedly over that much time pretty much vetoed that idea by default. Granted, that could be commented on and part of the joke, but this T-Minus installment would probably have to be extended another page just to make that work.

As this comic confirms, there are more than one type of Aberration in this context. The "vampire" Aberration and Sirleck are very different, but they're both Aberrations. An Aberration is any person who has undergone a process turning themselves into parasitic monsters, physically and mentally, in an effort to unnaturally extend their own lives.

Speaking of which, I mentioned "disturbing implications" in the commentary of the previous comic. The theories that burst forth from this vague statement wound up inspiring a sketchbook entry, and as promised in the commentary of THAT, here's some clarification: I was referring to, and only to, the implication that Sirleck used to be human and became this thing voluntarily.