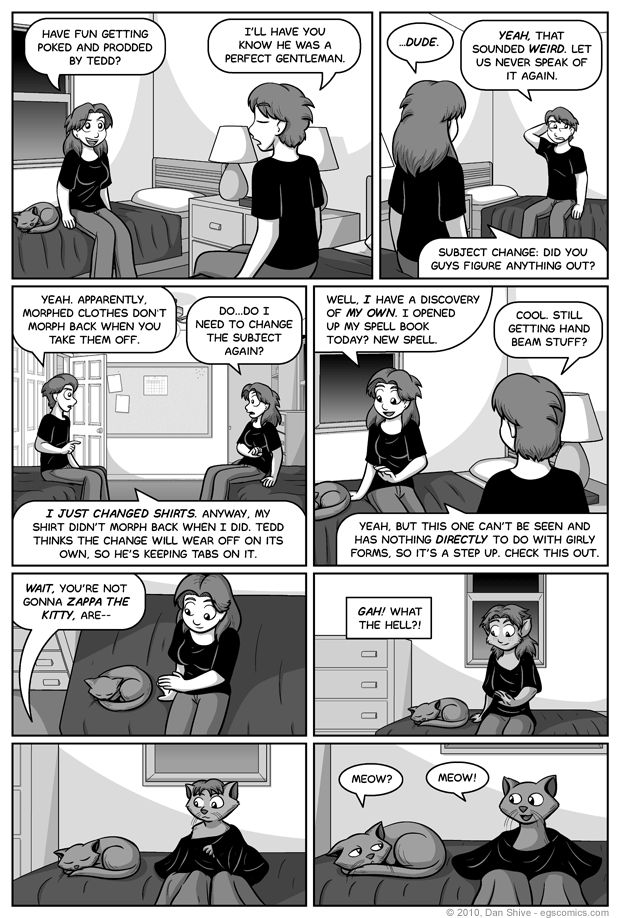 Posted March 8, 2010 at 1:00 am
I originally drew Elliot in such a way in panel one where you couldn't see his face at all. I found that to be horribly un-hilarious and redrew his noggin as it is here.

Yes, I had Elliot say "Zappa the kitty". No, I don't care that it's odd that he did so. I also briefly considered changing his last narration in this comic to a speech bubble due to it being odd to think "gah!", but quickly decided it to be awesome that he actually thought "gah!" Your opinions regarding the awesomeness of thinking "gah!" may vary.

I fully expect this comic to make some people worry about how relevant this will be to the plot and whether this part of the storyline is necessary. I would snarkishly say "wait a couple days and see", but given how many rewrites occurred during Sister 2 that resulted in extraneous exposition of not much importance, it's a somewhat valid concern. Nanase's clothing spell not only wound up not seeing use beyond its introduction, but the ending of the arc suggests that by the time she can use it again (assuming she can use it again), it will require a recap. Yay poor planning!

That said, this storyline was written in advance and Ellen casting this spell fits the story in several ways. The only way I'm going to say here on account of spoilers is that a new, non-V5 spell for Ellen was horribly overdue. That fact doesn't technically serve this storyline specifically, but it is true and important for the long-term.

If I may again bring up the horrible amount of rewrites for Sister 2, I had originally planned to have Ellen briefly offer up some resistance to Abraham, at which point she would have shown off a variation of her beam that would have been similar to Nanase's fairy punch attack. This would have simply bought some additional time for Nanase to regain consciousness, so it wouldn't have changed much beyond making Abraham's acceptance of Ellen not being dangerous more illogical.

The new spell was written out for a lot of reasons, but she might still wind up with a combat spell similar to that someday. I kind of like my characters lacking genuine projectile attacks, however, so we'll see.