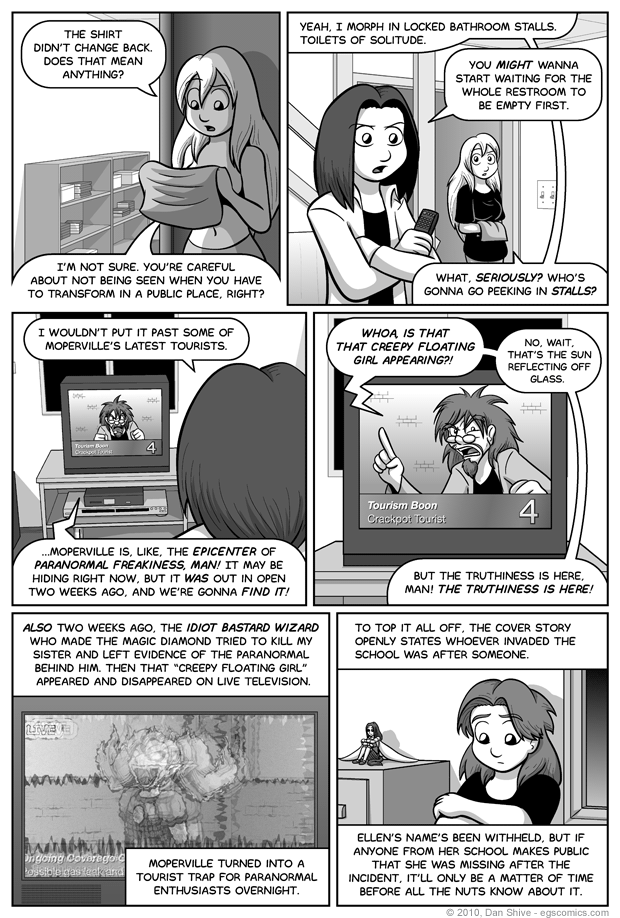 Posted March 5, 2010 at 1:00 am
Much like the first comic in this storyline, this comic was written with this being one of the first pages of what will hopefully be a future EGS book. It wouldn't be too terribly different if it wasn't, but panel five would likely be less wordy and it might have been done via Tedd and Elliot as opposed to Elliot's narration.

In other words, this storyline isn't going to turn into frequent, long-winded Elliot narration.

I really did intend for panel one to be a different camera angle, I really did. The problem is that the transition from the previous comic combined with the layout for the rest of the panels in this comic clashed terribly when I tried to just show a speech balloon popping out from the back room. I eventually concluded that the angle had to show Elliot in order for everything else to work, so I posed him / her as best I could to have it not be too risque.

That said, I don't think I did that great a job drawing the removed shirt. I wanted it to cover up Elliot adequately without looking like it shrunk or grew, but it winds up looking more like a small towel. I consider it a relatively minor issue, so I intend to just move on with keeping ahead with comics instead of toying with it. For the record, however, I am aware that it's not my finest work.

I don't think I do, but if I HAD to justify Tedd randomly turning on the TV, it's because he was switching the input mode of the television given that he was done with the initial data gathering, and the news just happened to be on. I don't think he would get bored enough to flip on the tube with the intent of watching something in the few seconds Elliot was back there.

"Truthiness" might sound familiar to fans of Stephen Colbert. My initial intent was simply to have a wrong-sounding variation of "the truth is out there", but everything I came up with was so close to "truthiness" that I just figured I should go ahead and make it a bonus reference for people to get. It works on two levels this way, so hooray!

One thing I wanted out of Sister 2 was to change and add to the environment and feel of Moperville. It used to be dismissed as a city with frequent tabloid nonsense, but now it's being taken seriously and a lot of the people in town are just visiting and/or up to something. It presents a lot of story potential, and even when it's not immediately relevant, the presence of this tourism boon is something I will enjoy having go on in the background.