Honey Badger is also one of the cards that can use those tunnel shortcuts, but guess what never comes up in the actual game?

Back during the card tournament, I had some semi-chibi panels I really liked. I’ve done similar sorts of things later, but I feel the proportions I did back then were about what actually works best. I feel it’s clearly more cartoonish while not being too much (or too little) of an extreme.

My rule has generally been “don’t explain the card’s ability until it’s relevant”, but here we have three cards with immediate passive relevance, hence a comic devoted to saying what each card does. Granted, no one has attract or repel at the moment, but if I’m gonna explain one or two of the others, it’d be weird to skip Honey Badger.

Energize is like Busty, but drawing before you move has some interesting side effects, and it’s independent of hand size. Busty makes it so you draw until you have at least 4 cards in your hand at the end of your turn, so if you end your turn with four cards before drawing, you don’t get to draw another card.

Magician, meanwhile, could have been used to stop Rhoda from taking Susan’s spaces, and could have FINALLY FLIPPING TRANSFORMED RHODA AGAIN! YEESH!

But yeah, Susan can counter any attempt to take her spaces (shame she only has one 1-space right now) so long as she has a spare card to discard, and she’s drawing an extra card at the start of her turn thanks to energize. If she’s lucky enough to land on other people’s spaces, she can focus on taking them with little to no chance of anyone transforming her in the meantime.

That is a point worth considering, too. The longer the game has been going, the more likely it is that you’re going to land on an owned space and will have the option to get points by transforming others. 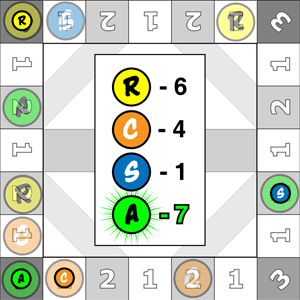 This is definitely a combination of cards that’s better to have in the late game than early on.