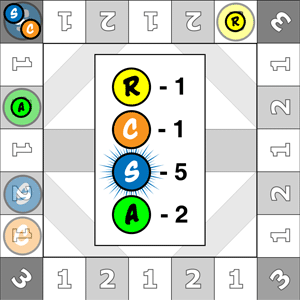 And Susan now has 5 points in a game in which 8 or more points wins.

For anyone who's forgotten who doesn't want to look at old comics just now, the Ditzy card is themed around using incompatible cards as though they were compatible with conflicts settled at random. That's how Susan bought a 3-space using one animal card and two clothing cards, and why only one clothing card got applied.

During actual playtesting, I settled this by assigning each card to a six-sided die, and going with whichever rolled highest.

We also now know what Squirrel does, and why it's good with Ditzy. Well, it's good with anything, really, but if you can add (or subtract) one from your roll, and you have a card that makes buying spaces easier, it's probably the most reliable way to both land on and get a 3-space in the whole game.

Meanwhile, Furry is an oddity of a clothing card. Basically, it has no effect that matters to gameplay, but if combined with an animal card, it makes the player a more furry version of that animal card. If they don't have an animal card on them, it's just the other parts of the outfit.