EDIT 2: This is the point at which I actually started making these guides, and I made this AFTER the next edit: 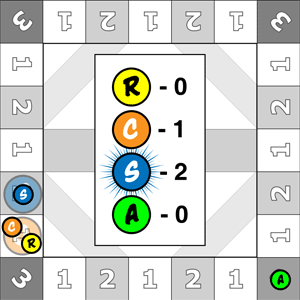 EDIT: There is apparently at least a little confusion as to where people are positioned, so here: 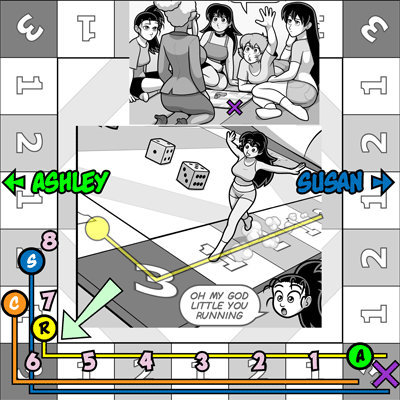 Please withhold any and all complaints and/or criticisms of the “Ditzy” card/form until Friday. Trust me, you’ll want to save your onslaught of critique until at least then.

And for the record, Susan ain’t kidding. The Ditzy card is arguably the most powerful in all the game, and Squirrel is a perfect companion for it.

That said, hey, Susan’s blonde! Will I find a flimsy excuse to make it so I don’t have to deal with adding highlights to Ashley’s hair on her turn, too? STAY TUNED!
The front of the cards visible in panel three are actually how they looked while playtesting, the only exception being that there was actual text describing the effects.
Rules Q&A (Answers to rules questions I've been asked as they come)
Rhoda still has the “Busty” card effect on her. The Golden Cheerleader was an Animal / Clothing two-type card, and therefore did not replace Rhoda’s Physical one-type card.
Susan, meanwhile, now has a Physical card and an Animal card on her, either of which is easily replaced. If a Clothing one-type card is played on her, however, both of the first two cards will remain. This means there are nine different outfits (if you include the default she’s already in) that Susan’s current form could potentially wear.
If Rhoda were to lose the "hand size is 4" effect, she would not have to discard down to 3. The only effect a minimum end of turn hand size has is determining how many cards you draw at the end of your turn.
It's possible, for example, to wind up drawing a card at some other time, and it won't force a discard. The only thing it might do is make it so you don't draw new cards at the end of your turn because you're already at or above what you'd draw to.
Incidentally, it only just now occurred to me to describe it as a  "minimum end of turn hand size". I mean, it really says it all. "Hey, I don't have the minimum at the end of my turn. I need to draw until I do", or "Hey, I'm at or above the minimum at the end of my turn. I don't get to draw any more."