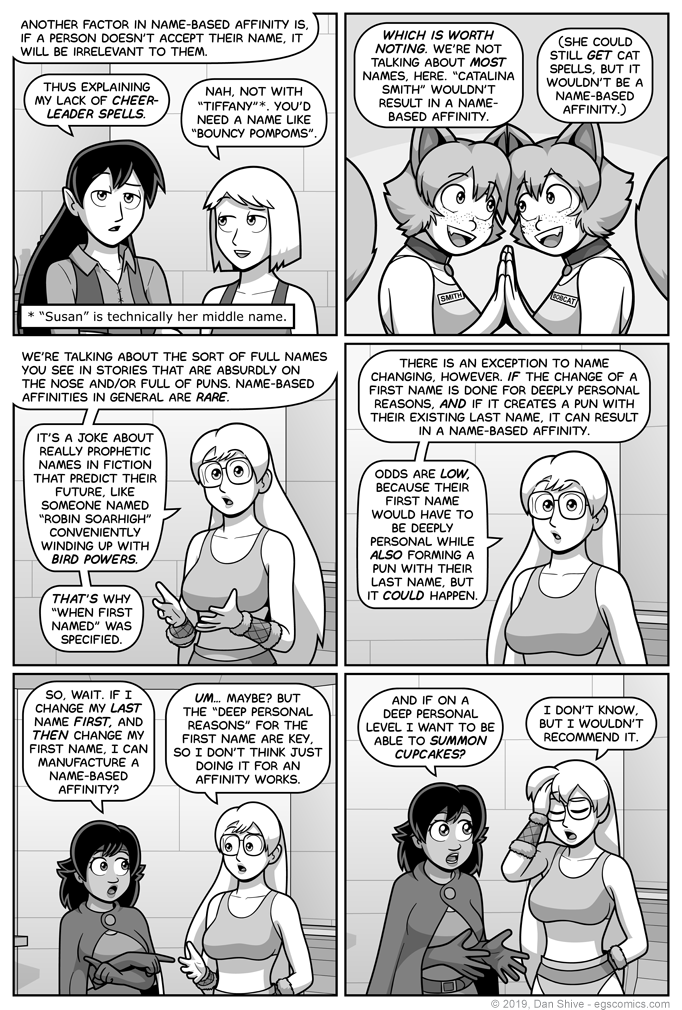 Firstly, I'm sorry. I messed up. What I'm apologizing for should be clear by the end of this commentary.

I edited the previous page a bit for clarity, and to better fit with this one. The edit is objectively superior to the original if for no other reason than the line "sets off Magic's future irony sensors".

As said in the comic, I came up with name-based affinities as a joke about certain names in fiction. It was meant to be about names people have had all their lives turning out to be weirdly convenient in ways that the people who named them couldn't possibly have predicted.

Examples include Otto Octavius of Spider-Man, the man who would become Doctor Octopus, and Remus Lupin of Harry Potter, a name that most definitely references wolves (more than I myself realized before I learned a bit of Roman history and the significance of "Remus").

Also, as someone pointed out to me after the last comic, a whole BUNCH of characters in the Ace Attorney series (seriously, the very first witness you face in that game is named "Mr. Sahwit").

So it's just a joke about there being an explanation for that sort of nonsense in EGS. What, a huge coincidence? Nuh-uh! Magic saw a chance for IRONY! Or appropriateness, which is sort of the opposite of irony? Depends on the specifics.

I made a couple of mistakes, however. Firstly, I didn't drive home enough how rare name-based affinities are. From the feedback I got after the last comic, it was evident that many people interpreted it as applying to everyone, with general name origins potentially affecting affinity.

That was not my intent. This is meant to apply to the sort of names one finds in fiction that make people groan about how absurd they are, such as "Woody Treechomp" for a guy who turns into a mutant beaver lumberjack later in life.

Secondly, and this is the bigger mistake, I failed to consider that many people change their names later in life, and that many readers of EGS in particular would reasonably have a problem with the idea of a name chosen at birth having power like that.

It's a problem that's obvious in retrospect, and I missed it while being focused on the whole "ha ha, fictional on the nose names are SILLY". I apologize for that.

So I changed things a bit. Absurd names chosen at birth can still result in name-based affinities, but not if the person doesn't accept the name they were given, and first name changes CAN result in name-based affinities if done for very personal reasons, but aren't likely to unless they coincidentally result in a pun when combined with the last name (essentially no more or less rare than if a name is never changed).

Granted, as Lisa said, there are potential loopholes here, such as changing the last name before changing the first, but that sort of intentional manipulation might mess up such a thing, so... Best odds are coincidence and accidentally gaining a name-based affinity.

Parents can still try to manipulate a name-based affinity, however, which is a potentially more sinister aspect of what is otherwise just intended as a joke.

(It's maybe potentially possible I have a character this has happened to in mind.)

As for last names changing due to marriage, I don't think that affects such affinities? Maybe if it happens before an emotionally first name change, but I'm not sure. It's unlikely to come up, but if it does, that would be the time to settle it.

Also, nobody tell Susan, but "Tiffany S Pompoms" actually would count due to Magic's sense of irony and Susan's own thoughts about the name, and the only reason she doesn't have an irrelevant name-based affinity for cheerleading magic is because her inherited affinity for magic weaponry took precedence.