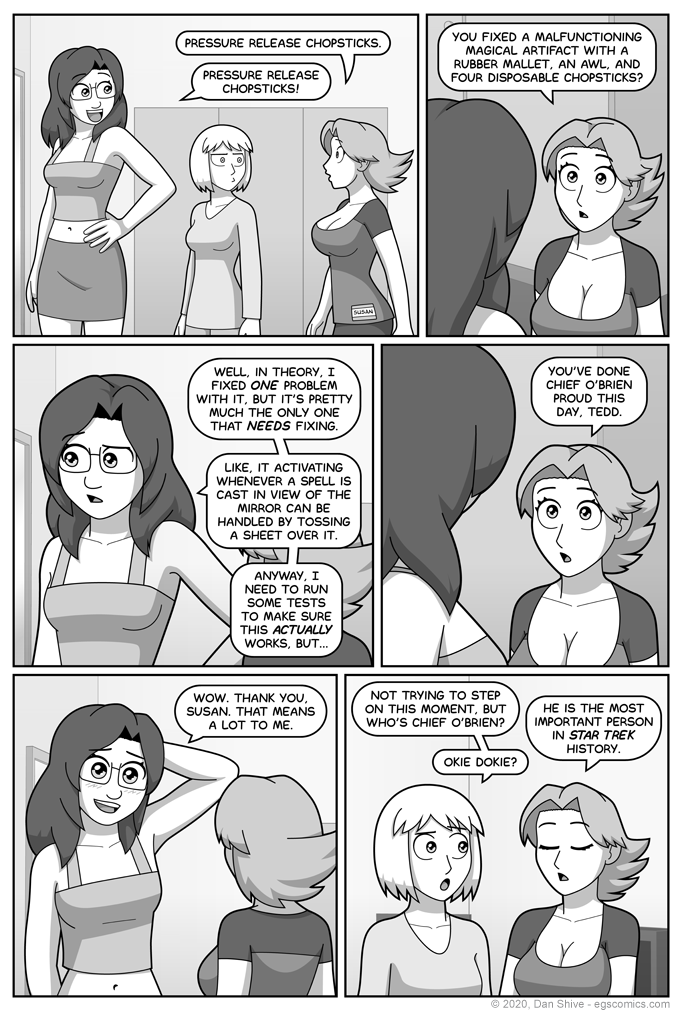 I only have five panels worth of material for this page! What do I do?!

Alright, that's enough of that.

This page was supposed to be incredibly indulgent filler (woo Star Trek and Lower Decks referencing) to shamelessly buy time for me to sort something out without skipping a day, but then it wound up bringing up the awl that was easily missed in the previous comic, and Tedd got some exposition in about how "fixed" the mirror is that would have had to have gone somewhere, so... This page actually has purpose?

Anyway, yes, an awl. Tedd did not just hammer chopsticks into a door. She used a tool to make holes first ("thwack"), then gently set them in place ("tap").

Granted, an awl wouldn't be the best tool for that (it's basically just a big nail with a handle you hit with a mallet), but it's the one I'm at least a little familiar with thanks to a jerk drawing table that didn't have holes necessary for assembly pre-drilled, so nyeh.

Susan knows what an awl is for the sake of dialogue flow. It's entirely possible she's had reason to use one, or has simply heard of them before, but heck, I've used one before (cursed drawing table), and I still had to look up what to call them.

The issues with the mirror door

1 - Automatically activates and starts charging whenever someone casts a spell while being reflected by it. This should be manually activated.

2 - Doesn't know when to stop charging.

3 - Stored magic power doesn't dissipate fast enough on its own to prevent an energy buildup similar to what Elliot and Ellen used to deal with, and its solution is the same as theirs was (by casting spells).

Issue one isn't fixed by pressure release chopsticks, but a sheet works as an "off" button, so whatever.

Issue two also isn't fixed, but the pressure release chopsticks (in theory) prevent it from storing too much energy, and it will stop charging on its own after a while.

Issue three is (in theory) fixed with the pressure release chopsticks, as they should dissipate the magic power fast enough to prevent excessive magical pressure.

I outline this here because I think there's enough information in the comic itself to follow the story, and more in-comic would hurt pacing, but someone interested enough to, say, read these commentaries might appreciate the additional detail.