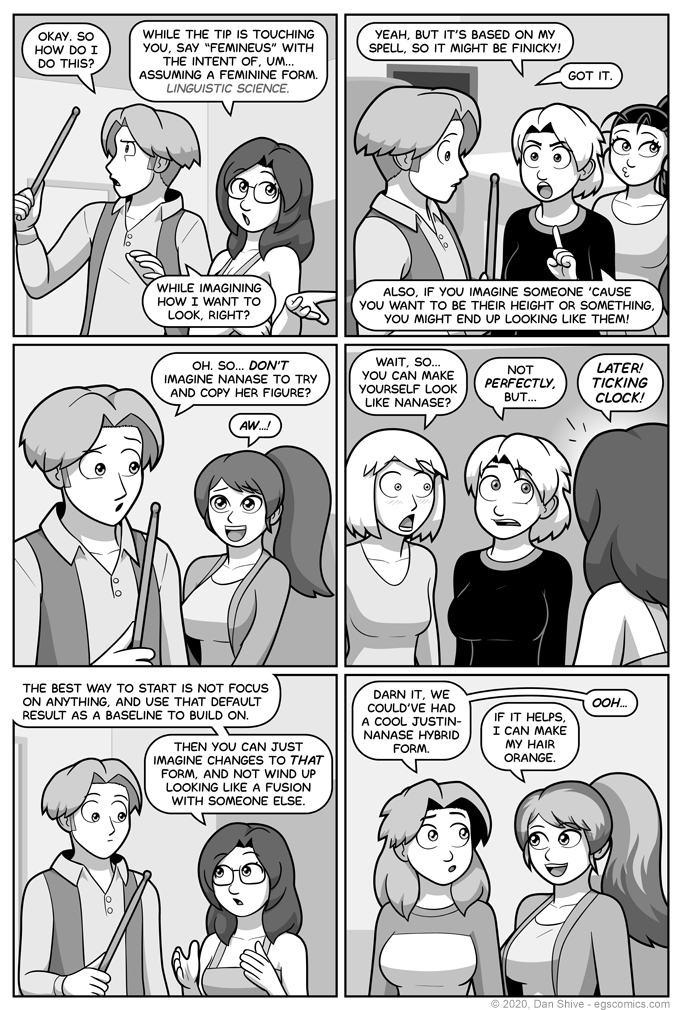 When are they going to get to the montage factory?! (Next page. We'll get there next page.)

I considered having Diane ask Elliot about being able to look like, well, Diane, but I decided Diane would prioritize the Nanase question both in context and in general. She's had that crush for a while.

More Latin as explained by someone who doesn't know it

According to my Oxford Latin dictionary, "femineus" is an adjective that can be used for "womanly, feminine, womanish, effeminate".

One might see this choice and cry out "HOLD IT! Tedd only heard the suggestion of using 'feminine' forms in the previous page, presumably AFTER making the spell! Why would Tedd have chosen this exact word instead of other options prior to that?!"

Because "Femineus" begins with "fem" and ends with "ineus", and Tedd thinks that's cool. Seriously, Tedd isn't going for fantastic accuracy with these names. The ultimate deciding factor is whether Tedd thinks it sounds cool.

I would also like emphasize that this is all on Tedd, and I detach myself from all spell name choices.

Speaking of "feminine", I decided to try out the suggestion of "feminine forms" for a few reasons. One is the belief that "male / female" is a false dichotomy on even a biological level.

Another is that "male / female" can be seen as referring to gender identity.

Yet another is that "feminine / masculine" can be viewed as how someone is being superficially presented without being who they are at their core.

These are all subjective matters of personal perspective, and I'm not getting on a soapbox claiming you can't refer to "male / female" forms without being horribly wrong and/or evil.

English is imperfect, the opinion that "male / female" should refer to what's physical is valid, and there are individuals I've heard from who are both trans and have that opinion.

What I am doing, however, is acknowledging that I have readers who are uncomfortable with "male / female form" phrasing, and trying out a different way of putting it. I've done my best to make it natural for the characters to try it out without it being a lengthy, drawn out thing to make happen.

Much like one might not make a wombat attack joke around someone they know to have had a bad encounter with a wombat, I am attempting to be considerate to an audience I know I have.

As much as people complain about political correctness, there's a difference between trying to phrase everything some arguably perfect "correct" way, and being aware that the person or persons one is communicating with are uncomfortable with something that can be fairly put another way.

Also, Tedd's willing to give it a go and analyze the results as a scientific experiment, and I adore that.