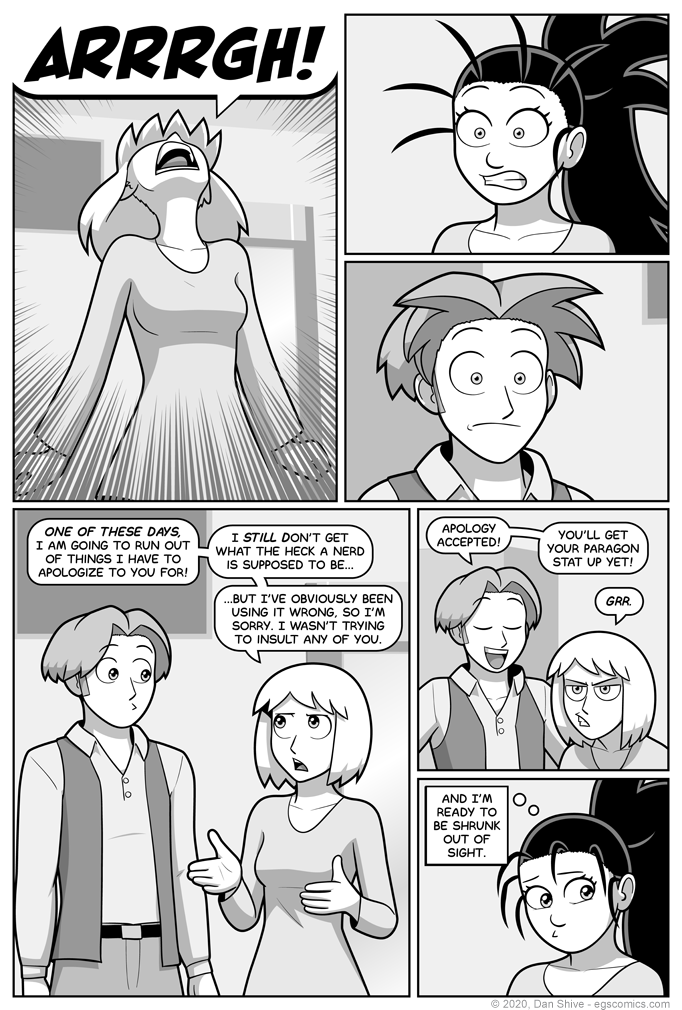 I considered a more polite and reserved apology coming from Diane.

That's an oversimplification, as what the games would consider Paragon or Renegade could be odd at times, but that's at least good enough to understand what Justin was referring to in panel five.

When it came time for Ashley to speak up, she did say "...using a word many people identify as...", which may have lead to conclusions about it being a proxy. Which I can understand, and what she said is applicable to other more significant labels and identities.

Some people didn't appreciate the apparent treating of nerd as an identity as equivalent to other matters of identity. I didn't see what was being said as doing that, but I can see where they're coming from. I had this to say in response:

There are things people identify as, as in terms one finds important to their sense of self, other than their gender or sexuality. This can include seemingly trivial things that are nonetheless important to that person.

This does not make gender or sexual identity less important.

One of the few labels I readily and naturally apply to myself is “cartoonist”. One may think “well, Dan, that’s just your job / hobby / whatever”, but to me, it’s an important part of who I am, and it’s a rare thing that I will readily refer to myself as. It matters to me.

Relatively trivial in the grand scheme of things, particularly from a social perspective, and possibly only makes sense within the confines of my own mind, but it is a part of my identity.

This can be the case without diminishing other important matters of identity.

I don't know if that helps at all, but I believe it to be true.