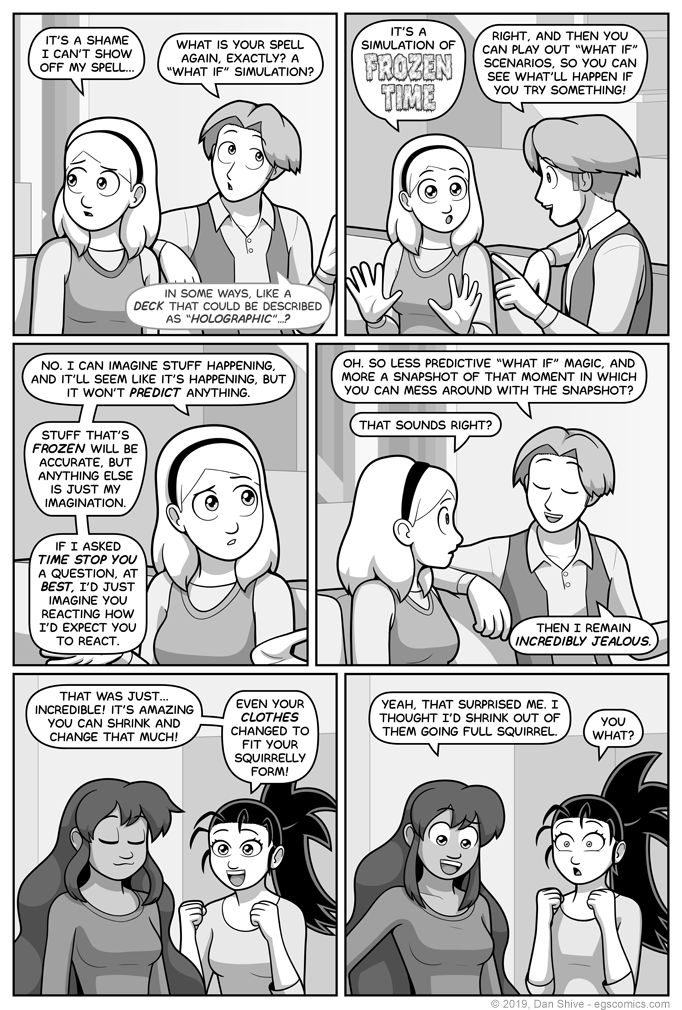 I'm poking a bit of fun on this page at reader predictions regarding Sarah's spell when it was first revealed. It felt like people were trying to get so ahead of the comic with predictions of what the spell was for that they missed it when I said what it actually was.

Granted, this is me, so it was actually a bit convoluted given how I wanted Sarah to be able to change things via THE POWER OF IMAGINATION!

The core point of it being a simulated time stop, and not a way to accurately play out "what if" scenarios, however, took longer to iron out than I would have predicted.

Which is a thing I've witnessed happen with all sorts of fiction. Something is predicted before what's actually happening is revealed, and things get interpreted through the lens of expecting that prediction to be accurate. I've seen it with movies, TV shows, comics... Pretty much everything, up to and including non-fictional matters, now that I think on it.

Huh. I wonder if there's any way to abuse knowing that happens? HMMMMM...

As mentioned in the previous commentary, Grace was always going to expect one hundred percent squirrel to be too much for her clothes to transform with, and originally, she was going to be right. This would have resulted in a particular conversation happening.

Fortunately, we can get to the same conversation via this route, and this route has the convenience of less awkwardness, and fewer camera angles worthy of an Austin Powers bit.

Which I consider a plus, though I know some of you will be picking up pitchforks and lighting torches after reading that.