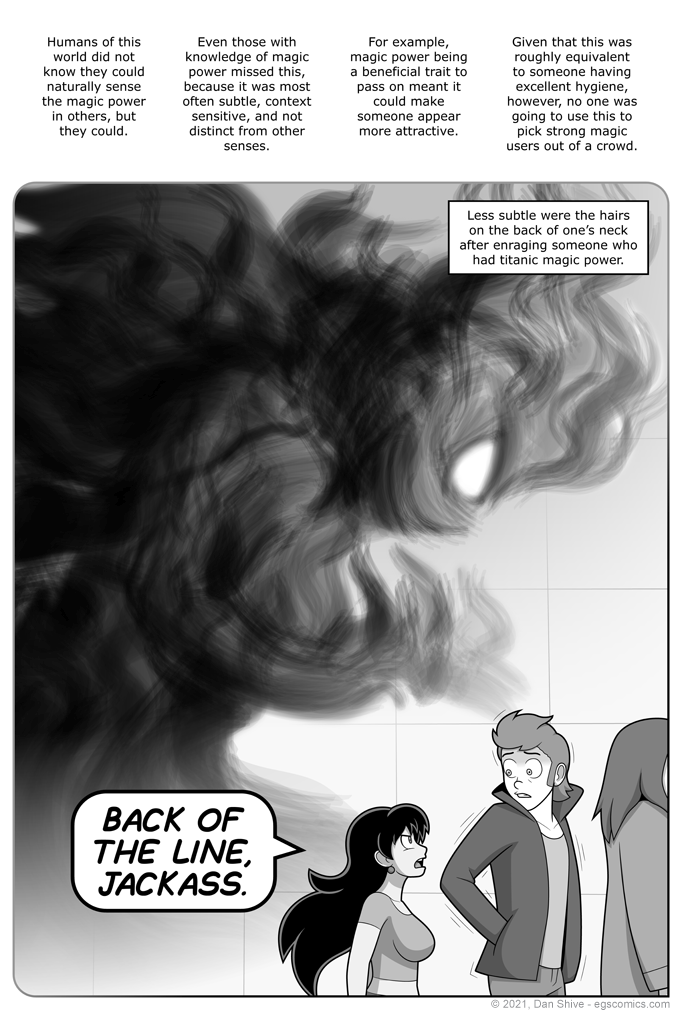 Look at how Friday this comic is! How DARE it be on a Monday! Now I have to have a comic that feels like a Monday on a Wednesday, and what's Friday going to feel like?! MARCH?! It's going to feel like March now!

Anyway, this page took less time than most, but still managed to take quite a while simply due to how much I kept rewording things and experimenting with the visual representation of Rhoda's power.

Truth be told, I sort of wish I'd done the arms on it differently, but the way I drew it, it would've been impossible to change the arms without starting over, so I went with it rather than risk falling down a rabbit hole of redrawing Rhoda's power several dozen times.

I wanted to give an impression of what sensing magic power without realizing it was like without it being a massive barrel of exposition. The whole "it can make people more attractive" thing is something I've wanted to establish in canon for a while, and it probably gets the point across with the least amount of additional rambling, so there it is.

The most common other way it can be sensed (that I didn't get into for pacing) is simply making someone stand out a bit more. It's actually not good for stealth to have a lot of magic power. Someone might have a vague awareness that you're nearby even if hiding, and though they might not be able to pick you out in a crowd and say "they definitely have magic", they'll be less likely to not notice you. It's harder to just be a forgettable face in the crowd.

Granted, that same magic power can potentially be used to conceal a person, so there's pros and cons to being a powerful magic user if trying to be stealthy.

(Also, by my own rules of canon, that technically is just author head canon for now, but I am the author. I can PROBABLY establish that at some point in the comic itself if I want to.)