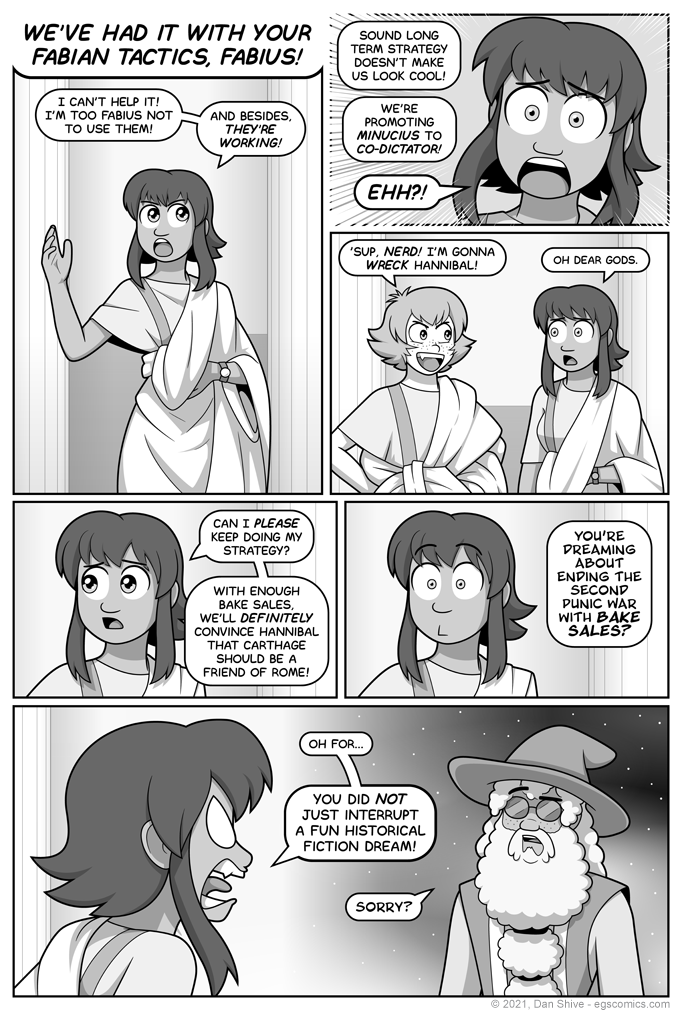 - Emissary of Magic in Squirrel Prophet (fair amount of skin visible in this one, just fyi)

- Emissary of Magic in Sister 3

Firstly, an FYI: I'm going to take at least one day off from story comics next week, either Monday or Wednesday (still deciding which). This is because I'm getting my second vaccination shot (yay), and feeling sick for a bit is to be expected.

I'm hoping it will be just the one story comic that's delayed, but there's no way to be sure. I'll be sure to keep everyone in the loop on any schedule changes, however.

I wanted to see what Grace would look like with short hair like this. Were I to try this again, I would try it with none of her hair touching her shoulders. I'm not absolutely certain that would look better, but I'm betting it would? Perhaps? There's room to experiment with short haired Grace.

And with that out of the way, I hope you like nerding out about Ancient Rome, because there's a LOT of that below this sentence.

For what is ultimately a minor thing in the grand scheme of the story, this Roman dream bit stressed me the heck out. I wasn't confident about drawing the toga, I wanted to get the details right for the exact time period, I wasn't sure what would be behind someone addressing the Roman senate, I wasn't sure if I was going to have to show some senators...

Ultimately, I just went with a toga wrapping and shirt that might not be accurate, because THAT'S what I could get the best references for, up to and including the process of how it was wrapped.

With all that in mind, I decided it would be funny if Grace was wearing a watch, and if Minucius-Catalina's toga was wrapped incorrectly by any standard.

Before anyone is too harsh on Minucius-Catalina, however, it's my understanding that toga's weren't worn by most people in Ancient Rome. They were status symbols, excessively oversized at twelve-to-twenty feet in length (3.6 - 6.1 meters), dyed in expensive ways, and so awkward to put on that those in power would be assisted in putting them on by slaves.

If I'm wrong about any of that, I'll make note of it with my apologies in the next commentary, but that's my present understanding of togas in Ancient Rome. Catalina having done a terrible job because she wrapped it herself only says relatively good things about her in my opinion.

Fabius-Grace most likely went morally neutral by asking some friendly birds to help, but she can talk to animals, and basically being a cartoon princess is cheating.

In any case, as strange as it might sound from a modern perspective, walking around in what appears to us like oversized bedsheets was apparently a sign of wealth and power made all the more ridiculous and terrible by how impractical they must have been.

I never expected to have strong negative opinions about togas (beyond the difficulty of drawing them), but in the process of trying to figure out the visuals for this comic, I have formed several.

I'm not an expert on Ancient Rome (or much of anything, really), but here's my understanding of a few things related to Fabius and the Second Punic War:

A dictator in Ancient Rome was an elected official given emergency powers for six months in a time of crisis. These emergency powers were meant to circumvent bureaucracy, and allow a leader immediacy in their actions.

If you're unfamiliar with Roman history, and yet this still sounds familiar somehow, it's possible you've watched Star Wars: Episode II – Attack of the Clones.

During The Second Punic War, Hannibal, a very successful general from Carthage, caused such a crisis, and Quintus Fabius Maximus was elected dictator.

Fabius's tactics were successful in slowing down Hannibal, but lacked anything resembling a decisive victory over Hannibal given that his tactics avoided direct confrontation with Hannibal's full forces. These tactics would become known as Fabian Tactics, and they would see plenty of use throughout history.

For example, George Washington made use of them in the American Revolution.

This lack of a decisive victory, however, made Fabius very unpopular. Benefit of hindsight definitely seems to side with the use of Fabian Tactics for dealing with Hannibal (we're still talking about them thousands of years later, after all), but at the time, people hated it.

Minucius, a rival of Fabius, was given powers by the senate that undermined the entire point of having a dictator.

Minucius then proceeded to fail miserably at taking down Hannibal, and had to be rescued by Fabius.

If interested in more about the Second Punic War, I recommend Extra History's series on it from a few years back.