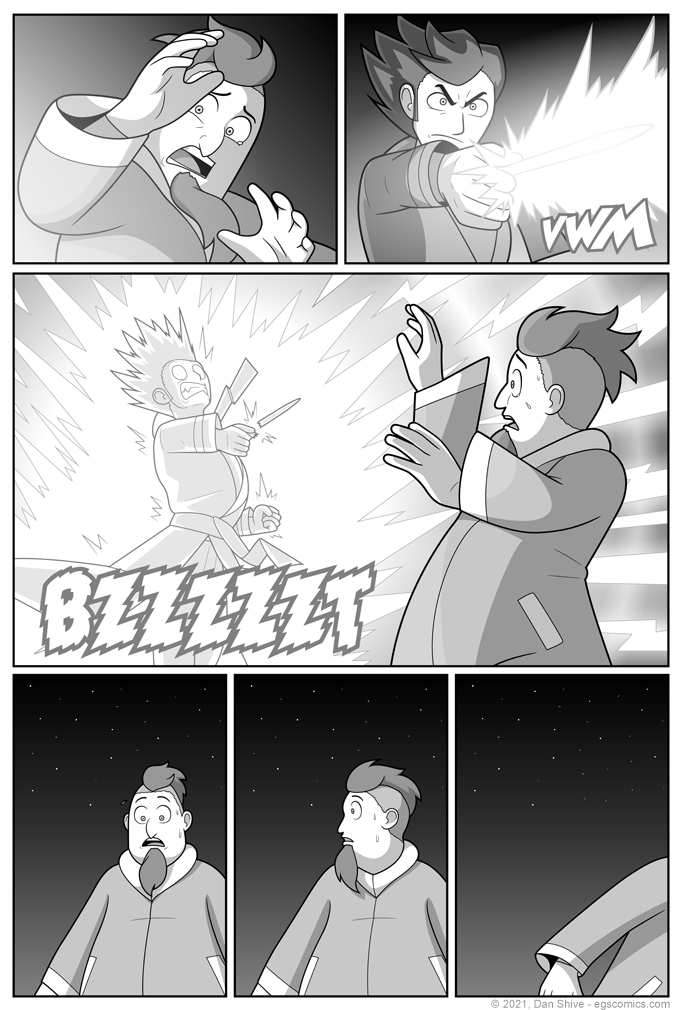 Before we get to the extra serious part of the commentary (that's not a joke, it will be quite serious), I would like to confirm that, yes, that guy's meant to look chicken-like! Or rooster like.

It's more fun to say chicken.

I had a lot of fun designing both him and the agent. Somewhat awkwardly, given that we already have an Agent Wolf, the design of the agent was something of a lean wolf. This is why he has pronounced canines, and a somewhat thin waist with a dense chest. It's also why I made sure to have his coat trail like a tail in the initial silhouette.

Granted, the design of the agent was all less subtle, and I saw some refer to him as being more hawk than wolf. That said, I knew his design, at least, was subtle, and I did not discuss it in the previous commentary because I was curious to see if anyone would compare him to a wolf.

As far as I can recall, no one did, but again, it was a subtle thing, and mostly there to help me design his character. It was the chicken-man whose design was overtly silly, and I consider it the highest compliment that someone described his design as something befitting the One Piece manga. That is exactly that level of varied absurdity that I strive for, though I will endeavor to NOT make however many princesses this comic may eventually have appear identical.

The extra serious part of the commentary

As much as I am a chatterbox in these commentaries, and indeed, have commentaries at all, it is ultimately my preference to allow comics to speak for themselves, and to hold off on certain commentary until an appropriate point in a story has been reached.

Given the sensitivity of the matter, however, I am going to go ahead and state that this agent behaved improperly.

I do not defend the actions of the suspect he was pursuing, for he did some very not-nice things and is deserving of a talking to, but he had legitimate cause to question the identity of his pursuer, and the agent escalated matters when he should have endeavored to deescalate them.

In fairness to the agent, he believed himself to have a spell that could incapacitate the suspect without damaging them. As demonstrated, however, even if an option is believed to be relatively safe, something can still go terribly wrong.

This is especially true in our reality, where there is no such thing as a magic spell that can safely and reliably incapacitate someone without harming them. Every real option is harmful and dangerous, and should never be used lightly.