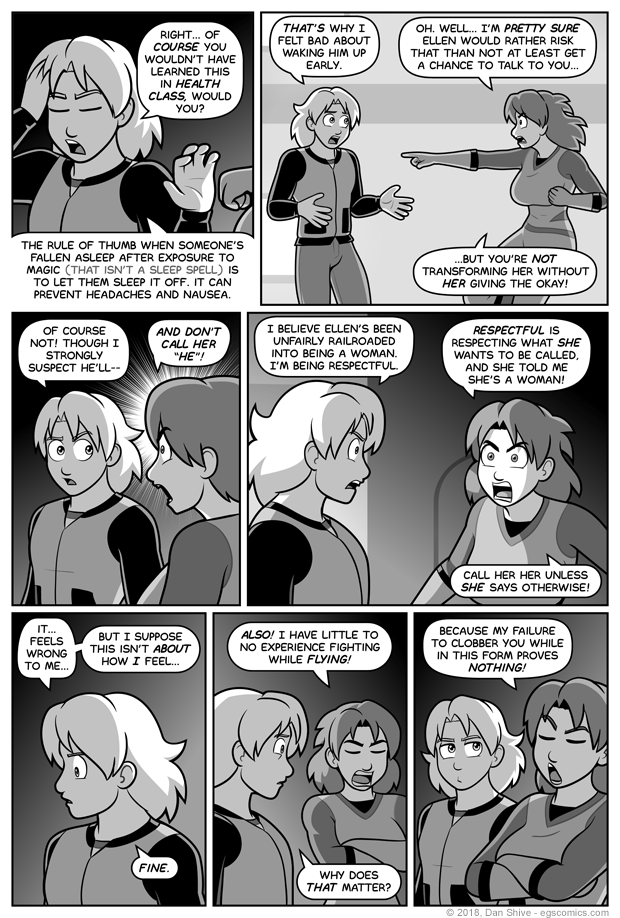 - "I don't really know how to fight while flying!"
- Elaboration on why fighting while flying is an issue for Elliot

Part of me didn’t want to have anyone to say anything about the misgendering going on so that it could be presented “as is” without any soapboxes while still giving people reason to consider for themselves why it’s a problem while seeing an example of it.

The problem with that, of course, is that it would mean Elliot wouldn’t say anything about it, which was sort of understandable when he was being blindsided by a laundry list of potentially bad things he’d had a hand in, but less so here.

That’s sort of an issue with stories like this. A point can often be made more effectively without being on the nose about it, but dodging the nose potentially requires inaction from characters who would act, so... It’s the sort of thing that’s easier to pull off in a short story than an ongoing series.

Granted, I hadn’t actually planned on addressing this issue in this story. I got to the moment in which Magus was going on about how he viewed Ellen’s situation, however, and I realized that’s what made sense for Magus. Correcting himself and using male pronouns was the in-character thing for him to do. Now it’s in character for Elliot to be nettled about it.

For whoever cares about authorial intent, my intent here wasn’t Elliot saying this because he read online “don’t do that” and he understood “okay, I’ve been told not to do that”. This is just him hearing Magus call Ellen “he” a bunch and it not sitting right with him, and him expecting it wouldn’t sit well with Ellen.

This is why he’s doing things like awkwardly saying “call her her” instead of something like “use she/her pronouns”.

Incidentally, and not wishing to antagonizing, I’ve no interest in reading anyone’s reasons for not using the pronouns people ask them to use. As a result of writing EGS, I’ve already seen many opinions on the subject, and I’ve already shared the conclusion I’ve reached on the matter via this comic.

I will say that nobody should expect to be thanked, liked, or tolerated while misgendering. Anyone who knows enough to know what misgendering is shouldn’t be surprised when others don’t take kindly to it.

Granted, this applies to many things, and many people still seem to take the position of “I knew this was a sensitive topic, and I knew some people would see this as insulting, and I said it anyway to those people, and now they’re yelling at me?! I feel so under attack right now, and they're the ones with the problem.”