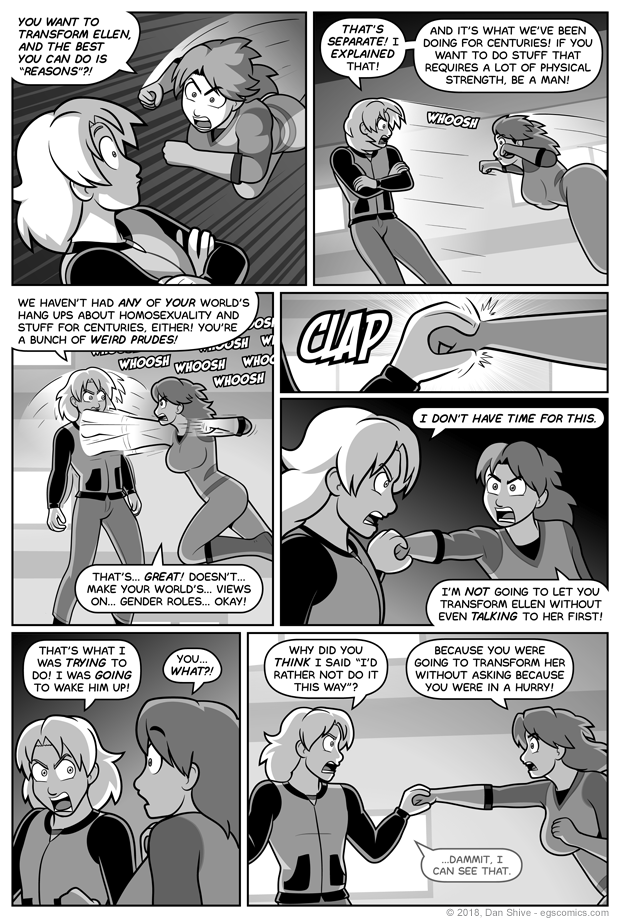 I really wanted it to make sense that Elliot went on the offensive. I wanted it to be something where people could be right there with Elliot, and not a situation in which everyone simultaneously facepalmed in response to Elliot’s reaction to Magus’s raised hand.

I also wanted why the miscommunication happened to make sense, though that can be judged next comic. Magus will elaborate on why he felt bad about waking Ellen up early, and why he reflexively expected Elliot to understand (I pointed this out in this commentary because it was going to be a lonnnng two days if I didn’t).

As I’ve mentioned, Magus’s world isn’t intended as an allegory. It’s not a case of “look, they did this thing that is meant to remind you of this real world thing, AND EVERYTHING IS GARBAGE! Learn from their folly!”

I wanted to give the impression that Elliot was alternating punches in panel three, but it sorta looks like he’s just repeatedly jabbing with his right arm? As is only natural and right, interpret as you wish, but know what I had intended, world! KNOOOOOWWW...!!!