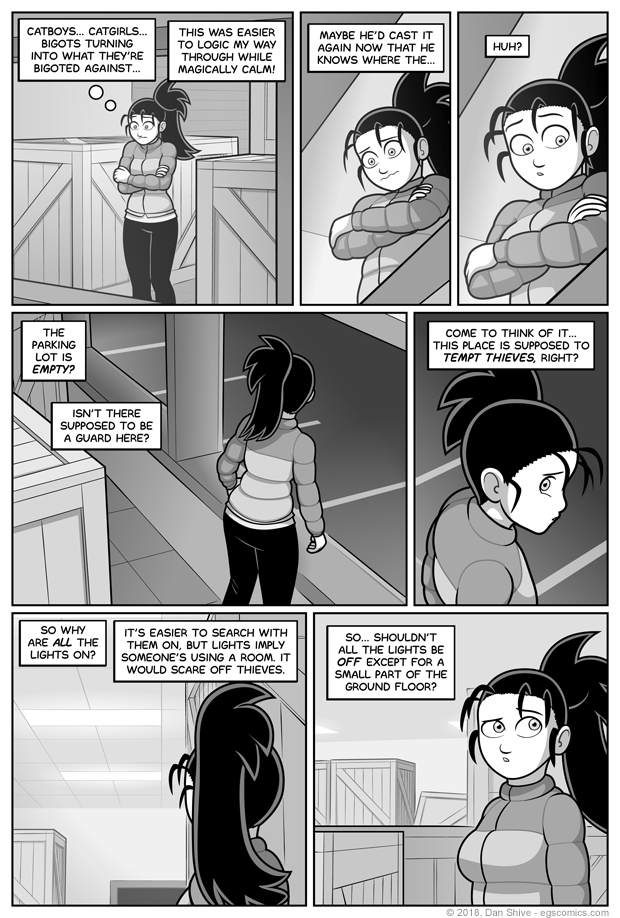 Give yourself a cookie if you saw all the lights on and the lack of cars in last Wednesday's comic and thought it was odd.

Although, only do that if you assumed that I had a good reason for it. If you assumed I just screwed up, well, I guess you can have a cookie anyway. I mean, really, you're giving yourself the cookie in any case. It's not up to me whether you get a cookie. You can defy my cookie declarations all you want, and really, I don't want to deprive anyone of cookes.

But maybe feel like you've earned it more if you actually deduced that ALL the lights being on and the lack of cars was significant.

In case you were wondering how the heck they got those big crates onto the second floor, the background of the first panel tells the story. That darker grey area with the faint lines is a big door that opens up to outside the building, and the crates are lifted via a, well, lift, and put in.

I suppose I could claim there's an elevator on that side of the building, too? It's the side we haven't seen, so there could be a big elevator there. That almost seems too efficient for this place, though, and you sort of want the thieves to have to leave the building in an awkward manner. An elevator might make it too easy. BUT THEN AGAIN...