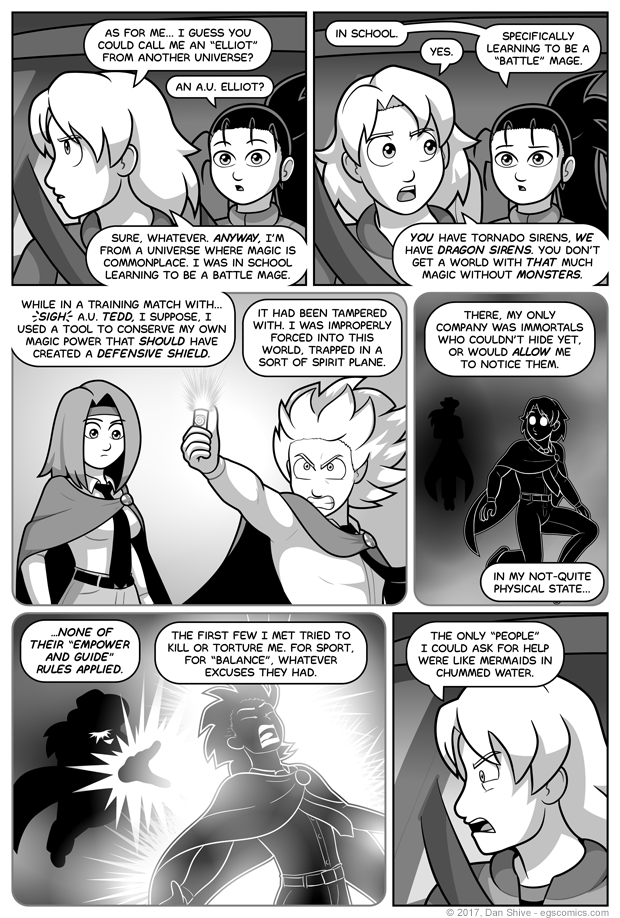 Even under a calm spell, Ashley manages to be something of a dork. I say that with affection, by the way, as one might know already based on how many times I've called Elliot a dork.

These three reference comics are all in a row, but hey, convenient if you only want one specific part:

- Terra, whose potential was, according to Magus, "being wasted"
- Magus using the shield teleportation spell dealie
- "Sabotage..."

And so, after all this time, we finally know what we would have known for ages if I was better at drawing distinct faces in 2007:

Terra is totes an A.U. Tedd.

...Wait, if I named Magus "Magus", a name found in Chrono Trigger, and Terra "Terra"... Was Terra an intentional Final Fantasy VI reference?! I honestly can't remember! Did I just think it was a cool name?

Honestly, me thinking Terra and Magus were cool names and not once making the Square RPG games coneection absolutely sounds like a thing I could manage. It being intentional almost seems less likely, but maybe I realized? I dunno.

I originally didn't write anything about dragons or mermaids in this comic, but then I thought panel two should have an example, and dragon sirens popped into my brain.

I'm sure it had absolutely nothing to do with Skyrim coming out on the Nintendo Switch this past weekend.

Panel six originally... Well, originally, Magus didn't say anything related to aquatic predators. He just said he couldn't trust the immortals, and I thought "well, that's boring." So I changed it so he brought up sharks! Everybody likes sharks!

I'm sure it had absolutely nothing to do with my re-watching Shark Week episodes of Mythbusters this past weekend.

It was after that, however, that dragons got edited in, and I decided it would be better to mention something more mythical than sharks. It needed to be something most people would be familiar with, however, so I felt stuck at first before thinking "hey, mermaids are well known, and people like to point out myths with them being dangerous jerks", so mermaids it was.

I guess mermaids being dangerous beings similar to sharks in Magus's universe is canon now. That's how these things get decided. A bit scary when you stop and think about it, really.