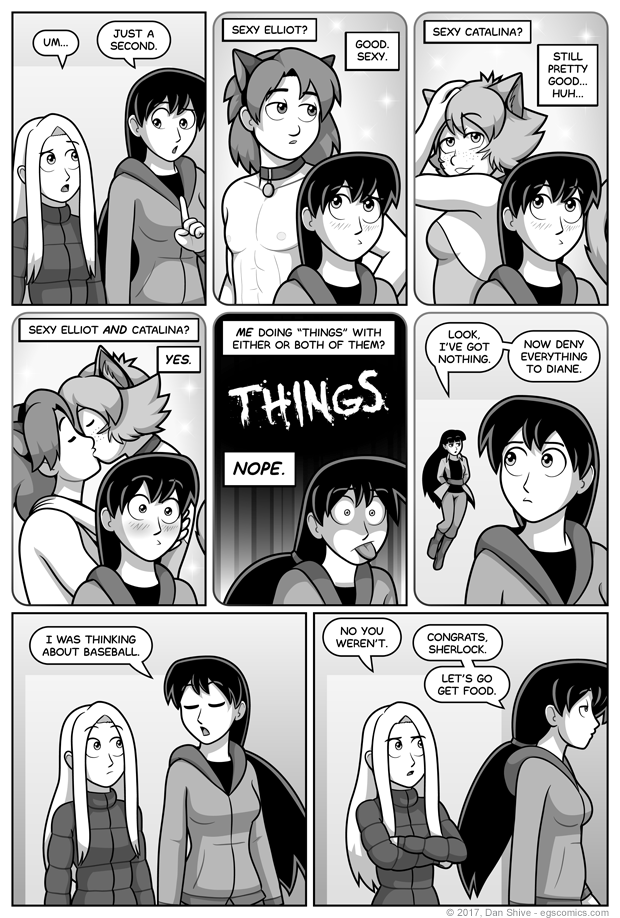 - The beginning of a relevant conversation with Justin
- Two comics after that: "I'm not even IN that fantasy."

I didn't consider the previous comic to be tangential to the story given that the story for the moment has been Diane and Susan getting to know each other, and I felt it was an important interaction for them to have (mostly the part about Susan not dating and addressing a couple of things about Diane and how she views her past self).

This is a bit more indulgent and wasn't originally planned, BUT after responses to the previous comic, I felt I'd be leaving an enormous elephant lying around if I didn't do this page. Granted, it's not that different from what I planned. The last two panels are almost exactly what would have been next, except this way I got to make a "thinking about baseball joke". I'm taking that as a win.

Susan potentially fits within the Asexual spectrum, and if she does and that makes people happy, that's great.

I'm not, however, writing Susan with the intent of her being anything other than what feels right for her. Susan can find people and scenarios attractive, but she is not currently interested in doing certain "things" with them. That may or may not ever change, but that's how things are right now for her.

All that said, the only really new information here is that she's realized there isn't much difference in how she feels about men and women, and why she might have thought otherwise before.

But what if MORE confusion?!

I have no intention of trying to clarity any further, so I'm really hoping this doesn't result in an avalanche of questions, because we have things to move on to and I plots to move on to them.