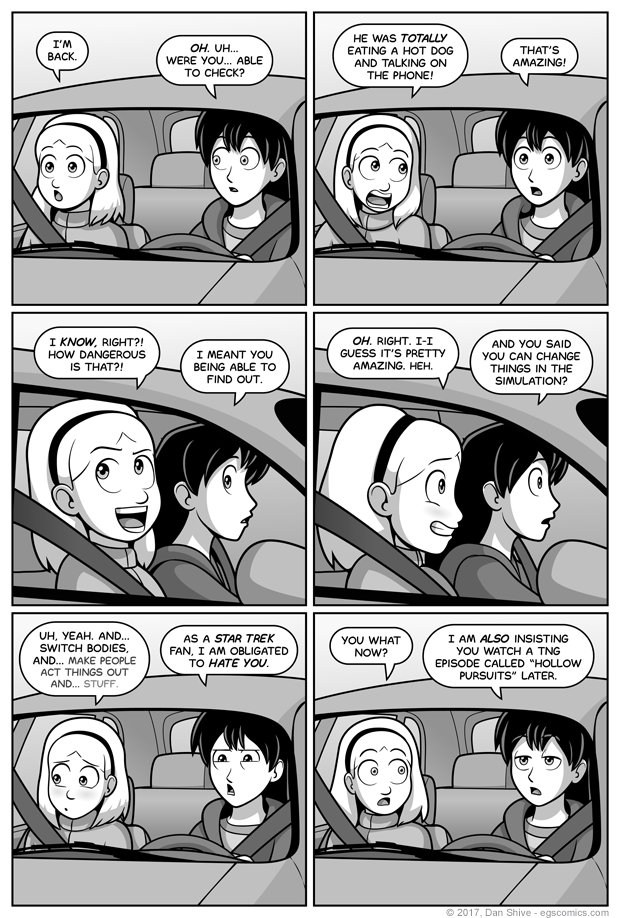 Please forgive panel three. I was attempting to give Sarah a particular sort of "can you believe it" expression, but it appears as though she were temporarily possessed by Ellen.

I’m really glad I found a good spot in the story for Susan and Sarah to talk about this. I was having some difficulty with that before realizing that I wanted a separate scene between the last comic with Elliot and the next, which also meant I could bring back the “Sarah time stop simulation in the middle of traffic” idea (originally how I was going to re-introduce Sarah’s spell in Sister 3).

For those unfamiliar, "Hollow Pursuits" is an episode of Star Trek: The Next Generation that deals with an introverted crew member's anxiety issues and their addiction to spending time in a Holodeck, a room that can basically simulate any sort of reality one wants (including recreating holograms of real people indistinguishable from reality, which this crew member did).

Susan's "hate" as a Star Trek fan is jealousy due to Sarah having what Susan sees as a sort of Holodeck spell, and from there it's easy to see why she'd suggest watching the episode.

And I know at least one person's going to read the last couple paragraphs and respond with "but everyone knows that", and my response is that everyone ALSO knows I make no such assumptions.

That explanation for non-Trek NERRRRRRDS out of the way, I have NO idea how the holodeck can so perfectly recreate actual people. I mean, scanning someone magic future technology, obviously, but nobody responds to finding their dopplegangers in the holodeck with "HEY! Where'd you get what you'd need to do that?!" It's apparently just something people can do without much fuss if you're on the Starship Enterprise.

EDIT - In response to two people and I suspect potentially more if I say nothing, I have considered transporter data being used, but I doubt someone would have permission to use those to recreate people in the holodeck for recreational purposes. Use of the data would fall under my "where you get etc" example.

I'm pretty sure there are examples in the series of them recreating people they wouldn't even have that excuse for, but I'm not 100% certain. Really, trying to find logic in the holodeck is a bit of a hollow pursuit in and of itself.